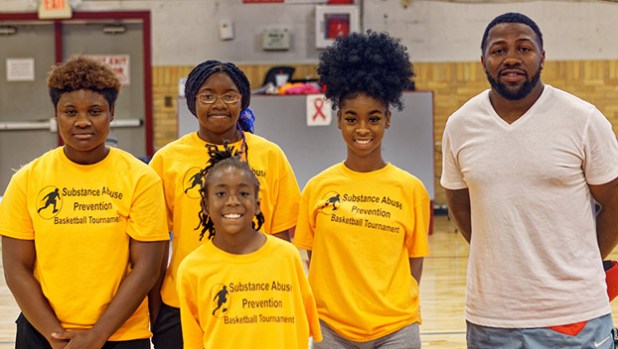 Two Charlotte County teams took part in the annual Substance Abuse Prevention Basketball Tournament last week. The event, which took place July 29 through July 31, is held each year for boys and girls ages 13 to 15. This time around, there were four boys teams, with three from Halifax County and one, the White Squad, from Charlotte.

On the girls side, one team represented Halifax and one, the Orange Squad, represented Charlotte. Before the tournament got started, all the kids gathered at Washington Coleman Community Center, where they listened to several guest speakers, including members of local law enforcement.

The speakers talked about changes in Virginia’s marijuana laws and other drug-related issues in the area. They also heard from Shawn Barksdale, who talked about the bad choices he made growing up and how he was able to turn his life around.

On July 30, the teams competed in round-robin basketball, where every group played each other once. Those results determined the rankings for the single elimination tournament, which took place July 31.

On the boys side, the White Squad won their semi-final 59-43. Charlotte County’s Yae Charlton led all scorers with 36 points, with his teammate Kylan Moorman adding 13. The Charlotte boys went on to win the championship, beating Halifax’s Red Squad 36-30. Yae Charlton again led all scorers with 24 points. Jaden Jones added 5, Kylan Moorman had 4 and Milton Bradley put up 3 in the win.