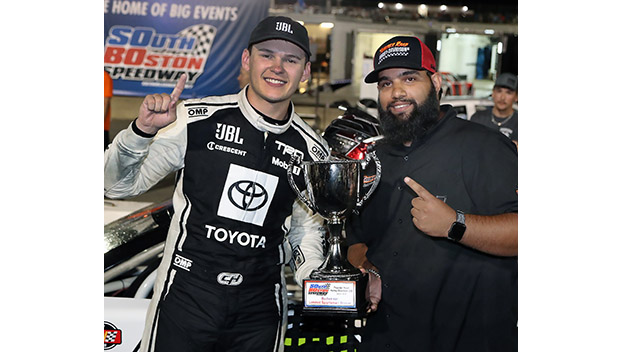 There was no question Corey Heim and Jacob Borst left it all on the track in Saturday night’s Thunder Road Harley-Davidson 200 presented by Grand Atlantic Ocean Resort at South Boston Speedway.

There is also no question they gave the fans that packed South Boston Speedway for the pre- Fourth of July showcase event one of the most thrilling finishes in the event’s history.

Heim, driving a car out of the Alton-based Lee Pulliam Performance stable, and Borst, an Elon, North Carolina resident, battled side-by-side over the final couple of laps. On the last lap, the pair made contact on the front straightaway as they sped toward the checkered flag. Both cars slid sideways as they crossed the finish line under the checkered flag, with Heim edging Borst to take the $10,000 first prize and the first race of the Virginia Late Model Triple Crown series that also includes races at Larry King Law’s Langley Speedway on July 23 and at Martinsville Speedway on September 24.

Heim also pocketed an extra $1,000, sweeping awards for leading at the halfway break at lap 100 and for leading at Stage 1 at lap 50 and Stage Three at lap 150.

“I’ve been in some exciting finishes before, but this might take the tea right there,” Heim said with a huge smile.

“This means a lot. I felt like this place owed me one. I came here in 2018 and had issues in the tech shed. We came back with a determination to win this race.”

Borst said he left everything on the track trying to score what would have been the biggest victory of his career.

“I couldn’t do anything differently,” Borst pointed out.

“I gave it all I had. That was the only chance I had. He had an excellent car, and we had a good car. I got underneath him, he slipped up. I made a little contact with him on the frontstretch. We both got a little bit of damage, but we were both going for $10,000 and a good trophy.”

The win was a big one for car owner Lee Pulliam of Alton, Virginia, who won the event six years in a row as a driver. Now, Pulliam is a winner as a car owner.

“This is special to me,” Pulliam said.

“It’s been two years since we’ve been to victory lane. For him to dominate tonight was very special to me. I’m proud. This is my home track. It’s a special place to be in victory lane.”

For much of the night, Heim and Borst were in control. Heim, who has two wins in the NASCAR Truck Series this season while driving for Kyle Busch Motorsports, led 191 laps of the 200- lap race. Borst led eight circuits and Carter Langley led one lap.

Defending NASCAR Advance Auto Parts Weekly Series national champion Peyton Sellers of Danville, rebounded after being involved in an incident to finish third. Mason Diaz of Manassas, and Langley rounded out the top five finishers. Mark Wertz of Chesapeake, and Camden Gullie of Durham, North Carolina finished sixth and seventh respectively and were the final drivers to finish on the lead lap.

The race was slowed by seven cautions that consumed 32 laps. There was one red flag for a major crash in turn one with 12 laps to go in the race that involved approximately a dozen cars. The race was stopped for about 50 minutes to allow safety teams and track crews to remove the damaged cars and clean up the track.

Barnes, a Draper resident, took the lead from Justin Dawson of Nathalie, on the ninth lap and drove to a 1.366-second victory over Jason Myers of Hurt. Chris Donnelly of Montross, finished third with Dawson taking fourth place and Brian Obiedzenski of Franklinton, North Carolina rounding out the top five finishers.

Nathan Crews, of Long Island, is not competing in the full slate of Southside Disposal Pure Stock Division races at South Boston Speedway this season. When he does compete, he makes it count.

Crews kept his perfect record in the division this season alive Saturday night, scoring a flag-to-flag win in the Southside Disposal Pure Stock Division race at South Boston Speedway. The race was set for 20 laps or 15 minutes, whichever came first, with the race ending on the time limit during the race’s fourth caution flag with 12 laps complete.

NEXT EVENT AT SOUTH BOSTON SPEEDWAY

The six-race event will be headlined by a 100- lap NASCAR Advance Auto Parts Weekly Series Late Model Stock Car Division Race. Twin 30-lap races are set for the Budweiser Limited Sportsman Division and twin 15-lap races are on tap for the Southside Disposal Pure Stock Division. A 20-lap race for the Virginia State Police HEAT Hornets Division will round out the night’s racing action.

Grandstand gates open at 5:30 p.m., qualifying begins at 6 p.m. and the first race of the night gets the green flag at 7 p.m.

Advance adult general admission tickets for the event are priced at $10 each and may be purchased online on South Boston Speedway’s website, www.southbostonspeedway.com or by calling the speedway office at (434) 572-4947.