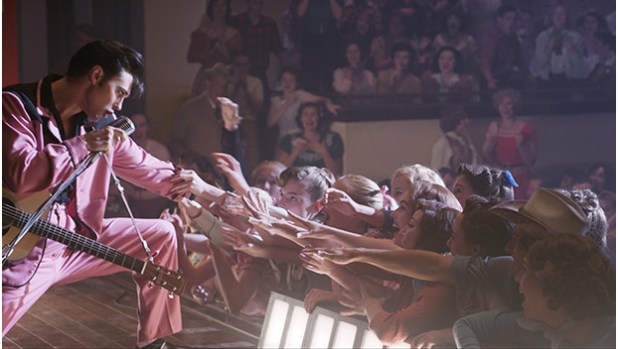 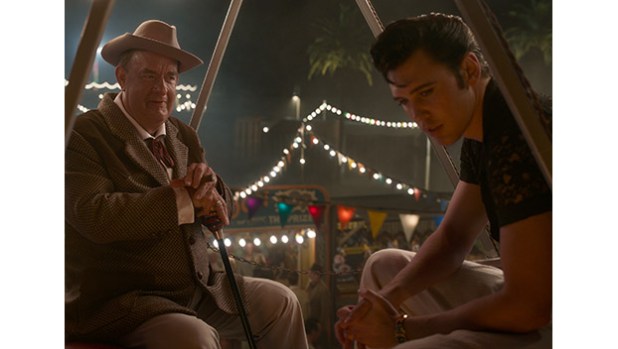 Elvis, directed by the wonderfully flashy Baz Luhrmann, is as glitzy and dazzling as the man it’s based on. As opposed to other biopics that take a warts and all approach on their subject, a good portion of ELVIS more or less worships Presley, choosing to instead focus on his contributions to music history, and most importantly paying tribute to the major influences in his life that arose out of the African American community.

I appreciate that Luhrmann took a different approach from recent biopics by not overly focusing on the negative elements we already associate with Presley, such as his drug use and womanizing. He instead pulls back the curtain on the fact Presley was taken advantage of his entire career by his manager “Colonel” Tom Parker (Tom Hanks). Of course the film does touch on Elvis’s own personal demons, but Parker is the real villain of this story.

If you couldn’t already tell, I am a sucker for a Baz Luhrmann movie; in fact, Moulin Rouge is one of my favorite films of all time. Luhrmann is one of few directors with a signature style, the kind of pizzaz that I can tell is a movie of his within five seconds of watching it. He is the ultimate showman, perfectly combining his trademark frenetic camera movements with spectacular cinematography and most importantly, incredible music tracks. And while this style is at first unsettling in Elvis, eventually when the movie settles in, it really adds to the experience and represents the showmanship we so associate with the King. I honestly cannot think of a director whose style better coincides with a man as flamboyant as Elvis. This is as “Baz Luhrmann” as a film can get.

Austin Butler is absolutely amazing as Elvis. He embodies Presley in every way, from his “look,” to his speaking and singing voice (yes, that is him singing many of the songs), to his guitar playing, dance moves and mannerisms. But most importantly, he effortlessly captures Elvis’s astonishing stage presence and natural charisma, a feat that few actors could pull off as easily. Having not grown up in Elvis’s era, but knowing how it feels to be a devoted fangirl, I loved that Butler’s performances on stage as Elvis transported me back to that time and what it must have been like to see such an exciting, original performer at the top of their game. I see this as both a star-making turn for Butler and a possible award-winning performance.

Now for the bad news. Think about some of the most annoying movie characters of all time. Usually they are in supporting roles and you can breathe a sigh of relief when they are off screen. Would you like it if they were one of the leads of a 2.5 hour movie, and more than that, the narrator (of sorts) of said movie? Yeah, me neither. And unfortunately, that is one of the major issues in Elvis. I am a huge Tom Hanks fan, but his performance as the Colonel is at best distracting and makes for a very irritating guide taking the audience through Elvis’s life. And it’s hard to fault Hanks because in watching actual footage, he admittedly does sound and act like the Colonel. It seems the bigger issue is the character’s distracting prosthetics and an outsized focus on an over-the-top man who should’ve been left more in the shadows, where he chose to operate from in real life.

Elvis is incredibly entertaining, with one of the best soundtracks of the year, not only in Butler’s rendition of Elvis’s songs but in the typical Luhrmann musical remixes we so associate with his films. Even if you aren’t a huge fan of the King, I think you will quickly get absorbed into Elvis fever and perhaps even find yourself admiring his contribution to music and society more than you did before.