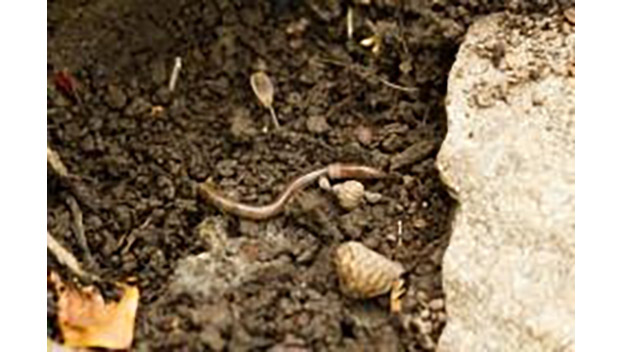 Across the eastern U.S., Asian jumping worms are eating part of the forest ecosystem – the top layer of the soil. By affecting the soil, the worms are affecting many other species of plants and animals. (Courtesy photo by Tom Potterfield)

“Invasive Asian jumping worms got their name because of the way they thrash around,” said Mac Callaham, a Forest Service researcher who specializes in soils. “They can flip themselves a foot off the ground.”

Like other earthworms, Asian jumping worms eat tiny pieces of fallen leaves. But there’s a problem. Those fallen leaves make up the top layer of forest soil. The litter layer, as it’s called, is home to a vast number of tiny animals. Many plants can’t grow or spread without the layer of leaf litter.

Asian jumping worms can eat all of it. They are never satiated.

“Soil is the foundation of life – and Asian jumping worms change it,” says Callaham. “In fact, earthworms can have such huge impacts that they’re able to actually reengineer the ecosystems around them.”

Scientists like Callaham are worried. But it’s hard to know how to control worm populations, as there are many unanswered questions about their ecology and life history.

Native earthworms are absent from the northern part of the U.S. It wasn’t always so, but during the last ice age, glaciers crept across the land and froze all the earthworms to death. Because earthworms are slow travelers, they have not naturally recolonized the areas where glaciers were present.

An international team of researchers, including Callaham, also reviewed what is known about jumping worms in North America, including their biology, impacts and the history of how they arrived in the U.S.

The worms began arriving in the early 1900s, tucked away in the soil of potted plants. But only in recent decades have these species been showing up in more natural forested ecosystems.

They are considered non-native and invasive because they did not evolve alongside the species of the U.S., and because they harm other species in the ecosystem.

Since jumping worms live in the soil, they can be spread in mulch, potting mixes or potted plants. Raking or blowing leaves can move and concentrate earthworms or their egg sacks, called cocoons. Some municipalities collect fallen leaves from local residents, and then return it in the form of compost. This too can spread the invasive worms.

“If these worms didn’t spread into forests and natural areas, they wouldn’t be such a problem,” said Callaham. “But unfortunately, they simply won’t stay where you put them. The best way to prevent future invasions is to avoid moving earthworms around.”