Movie Review — All The Old Knives 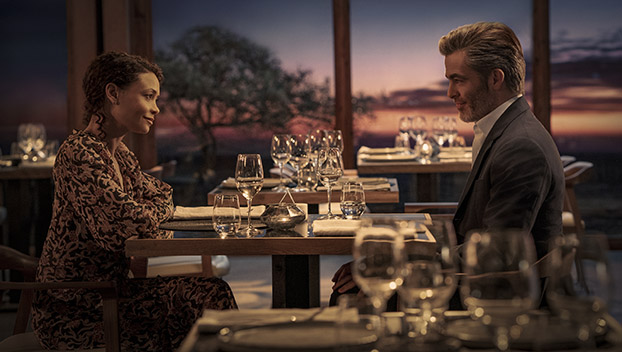 ALL THE OLD KNIVES is a sexy, slow-burn espionage thriller that feels very similar to the genre films made popular in the 1970s. Unfortunately, studios don’t really make these “smaller” movies nowadays, so I am excited that a streamer like Amazon Prime has put its money behind this one. I especially love that Amazon chose to take a chance on such a cerebral movie, one full of twists and turns that will make you second guess your theories throughout the film…and will make you pay close attention to boot.

Written by Olen Steinhauer, the film follows Henry (Chris Pine) and Celia (Thandiwe Newton), two CIA officers (and former lovers) stationed in Vienna, Austria. The two inevitably part ways after they fail to prevent a plane’s hijacking by terrorists, which results in the deaths of over one hundred people, including Americans. Almost a decade later, new information comes to light that indicates the CIA may have had a mole within their ranks that fed intelligence to the hijackers and enabled the deadly operation. Armed with this new information, Henry tracks down his former lover to try to figure out once and for all what went wrong and identify the person (or people) responsible.

The plot expertly jumps between a claustrophobic, tense dinner scene between Henry and Celia in the present to flashback scenes of the events leading up to the hijacking. And most importantly, Pine and Newton’s chemistry is off! the! charts!, an important element in a film like this that depends so heavily on the relationship between the lead characters and directly plays into their motivations. Whether they are shooting angry glances at each other from across the table or engaging in some of the most steamy scenes I have seen on-screen this year, this is a couple that will make you feel things. As a “Chris Pine is the best Hollywood Chris” truther, I haven’t seen him in such a sexy role, so prepare yourselves.

ALL THE OLD KNIVES is certainly not a film you should pop on if you are looking to turn off your brain for the night. From time jumps to surprising plot twists, you’re going to want to save this one for when you want to feel invested and completely immersed in a thriller that revels in the slowly building tension. Otherwise, you are going to get lost really quickly and not appreciate the film for what it is. You can find this film streaming on Amazon Prime now or in your local theaters!