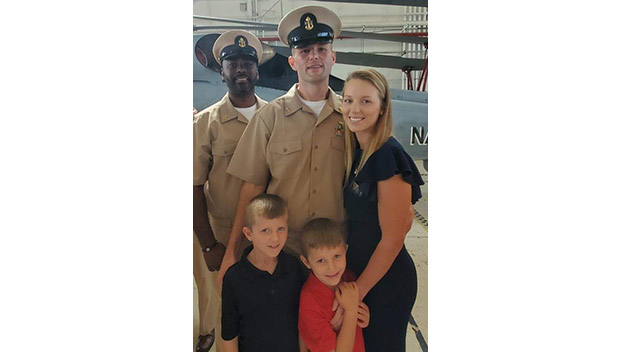 “I wanted to try it out, and I knew I was going nowhere in my small county,” said Daniel.

Growing up in Randolph, Daniel attended Randolph Henry High School in 2005 and graduated from American Military School in 2020 serving in the Navy. Today, Daniel serves as an aviation structural mechanic.

“I’m in charge of all the new airmen who inspect, wash, launch and recover helicopters,” said Daniel. “My favorite part of my job is seeing the growth of new sailors from school to earning their Plane Captains and learning this platform. Without me taking care of my sailors and giving them advice, they would be wondering why we have to do everything we do.”

“Being a chief means being there for any sailor, even if they are not in your command,” said Daniel. “It’s about being able to ask anyone how they are doing, and show them they are not in this by themselves.”

With a crew of nearly 5,000 sailors, the Chief’s Mess, as it’s called, makes up approximately 8% of the crew and serves as the connective tissue that bridges the gap between the officer’s vision and the enlisted crews’ daily tasking. The chief understands the mission and vision of the command and has the training and experience to teach and guide junior sailors, both officer and enlisted.

Truman deployed from Norfolk, Virginia, Dec. 1, 2021, is on a regularly scheduled deployment to the Mediterranean Sea where it has been operating with NATO militaries conducting dual and tri-carrier operations, enhanced air patrols and enhanced vigilance activities; in addition to several bilateral military exercises.

“Since arriving in the Sixth Fleet area of operations a key aspect of our mission has been to build integration and interoperability with our NATO Allies and Partners,” said Rear Adm. Curt Renshaw, commander, Carrier Strike Group Eight.

These efforts have focused on the Western Mediterranean, Ionian and Adriatic Sea. In early March, the carrier sailed into the North Aegean Sea, an area a U.S. carrier had never operated before.

Daniel and the sailors they serve with have many opportunities to achieve accomplishments during their military service.

“My proudest moments are when one of my supervisors was named Warrior of the Day for his contributions to the squadron, and being pinned to Chief Petty Officer by my wife and two boys,” said Daniel.

As Daniel and other sailors continue to train and perform missions, they take pride in serving their country in the United States Navy.

“Being a chief has impacted my life in a good way,” said Daniel. “I have always labeled myself as a leader, even as a new airman reporting to the line shack in 2013. I honestly do not think I have changed at all since becoming a chief. I am the same country boy now as I was a year ago. It has opened my eyes a lot to what all a chief does for a command and the Navy. I have excelled in my Navy career primarily due to the support of my wife, Laney, and our two boys, Brycen and William, and the mentorship of great chiefs along the way.”

“Never sell yourself short,” added Daniel. “You can accomplish anything in this world if you want it badly enough, and show respect while working towards it. If you have kids, strive towards being the best role model you can for them.”

Daniel’s grandfather served in WWII as an Army tank mechanic, and his wife’s family had someone in every branch besides the Coast Guard.