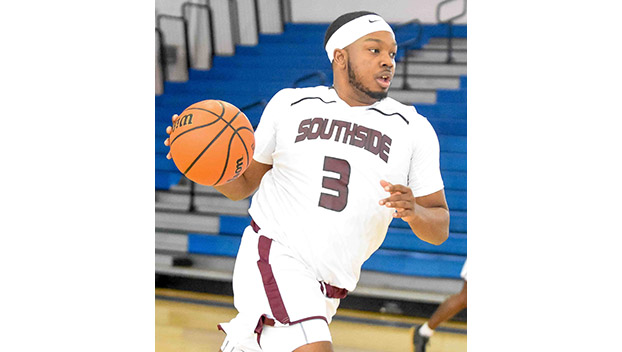 SVCC’s Tae Holmes pushes the ball up court in action from the local team’s 85-68 win over Wake Academy Prep on Saturday afternoon. (Photo provided by SVCC)

The win completed a 9-4 regular season for the local team that will open play on Thursday at 3:30 p.m. against Winston Salem Prep in the USA National Prep Collegiate Championships in Myrtle Beach, SC.

“We had a few games canceled due to COVID early this season so we did not get to play as many regular season games as we usually do,” said SVCC Coach Dennis Smith. “We were really glad however just to get back on the court after not playing last season due to the pandemic. Our young men have played extremely hard all year and we are excited to see what we can do in the national tournament.”

SVCC jumped out to a 5-2 lead at the 18:50 mark of the first half on Saturday on a three-point play by Marquise Petty.

A trey by Rick Sullivan and back to back 3-pointers by Joseph Jiggetts gave SVCC a 24-19 lead at the 8:19 mark.

A putback by Xavier Copeland and a deep trey by Isaiah Thompson right before the buzzer gave SVCC a 42-38 lead at the halftime break.

A big dunk by DeAndre Miles and back to back buckets by Thompson and Lanthony Joyner gave SVCC a 54-44 lead at the 14:25 mark of the second half.

A 3-point play by Tae Holmes and another dunk by Miles extended the SVCC lead to 71-54 at the 5:45 mark on the way to the victory.

Miles led SVC with 16 points and 11 rebounds on the day while Sullivan tallied 13 points, four rebounds and four assists. Petty finished with 13 points and 13 rebounds.