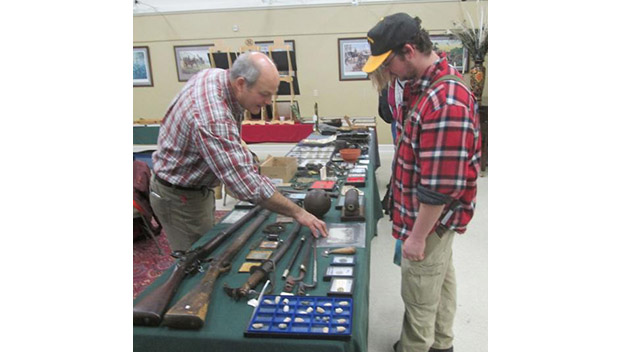 William Leigh of Leesburg shows his collection of Civil War memorabilia to Caleb Fisher of Turbeville at a Civil War and Military Show held at the South Boston-Halifax County Museum of Fine Arts and History in 2020.

It will be a new experience as the South Boston-Halifax County Museum hosts its fourth annual Civil War and Military Show Saturday, Feb. 26, and Sunday, Feb. 27, at its new location.

Formerly held at the museum, this year’s event will move to the more spacious Factory Street Brewing Company located at 210 Factory Street in South Boston.

Collectors and dealers from across the Commonwealth, as well as others from North Carolina, Pennsylvania and West Virginia are coming out to buy, sell, trade, and display cherished vintage military artifacts from all periods of history with an emphasis on the American Civil War.

After the show had to be canceled last year due to COVID 19, historians, collectors and military buffs will be eager to share military artifacts at this year’s Civil War and Military Show in South Boston, according to organizer Jerry Roxbury.

“I think it will be a good cross section of military artifacts, antiques and souvenirs. I think it’s going to be a great opportunity for individuals to come out and learn more about the Civil War,” added Roxbury.

He encourages individuals of all ages who have an interest in history to come out, and to those attending who have any of their own artifacts at home, he suggests they bring them.

“Maybe we can provide them with some information on what they have,” said Roxbury.

There will be exhibits, dealers to buy from, sell to or trade with — all at one convenient site in the Factory Street Brewing Company.

The event will focus on family entertainment with a $6 per person admission fee, and children under 12 get in free with a parent’s admission. All proceeds will benefit the museum.

Roxbury plans to have an assortment of naval artifacts, mostly swords, and while he said it is hard to tell exactly what individuals may bring, he said there will probably be military buttons and various other accoutrements on display.

The show will be the largest to date with over 30 individual dealers and displayers set up on 50 8-foot tables. Doors will be open to the public from 9 a.m. to 5 p.m. on Saturday and from 9 a.m. to 3 p.m. on Sunday.

Roxbury has been a history enthusiast and collector for most of his life, and after attending shows across the state he said he thought it would a be a good idea to bring the show back to South Boston for another year to have it serve as a fundraiser for the museum.

“If past shows are any indication, I think it’s going to be a great day of people with a like interest coming together and enjoying sharing their knowledge with the public,” said Roxbury.

Public parking for the event will be located at the Southern Virginia Higher Education Center parking lot.

If anyone would like to help sponsor the show, donations will be appreciated. Checks may be made payable to SBHCM and mailed to P.O. Box 383, South Boston VA 24592. For additional information on the show, contact Jerry Roxbury at (757) 615-4142 or email gcroxbury53@comcast.net.