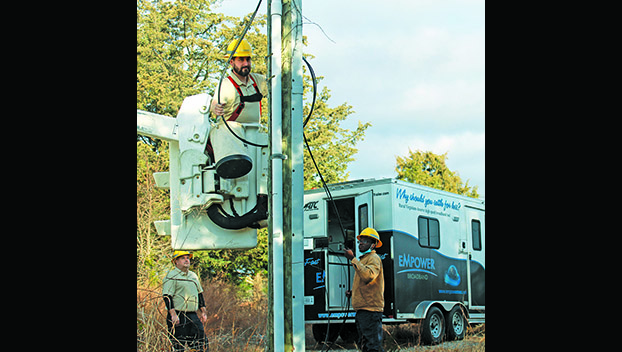 John C. Lee, Jr., EMPOWER President and CEO, stated, “This is a game-changing announcement for our region, our residents and our businesses. This award will ensure our children and families have the same opportunities for learning and working as their counterparts living in more urban areas of Virginia.”

The project timeline is extremely aggressive and is expected to commence in February once final agreements between the SPDC and Department of Housing and Community Development (DHCD) are formalized. EMPOWER is targeting a 36-month timeline to install mainline fiber, followed by the connection of new accounts as each fiber section is constructed and activated. EMPOWER’s team is in the final stages of selecting an engineering firm to provide oversight for this massive construction program.

Dominion Energy Virginia will support the extension of broadband to unserved areas by deploying middle-mile fiber that EMPOWER will use to connect end-customers to the internet. “In a world where broadband access is more critical than ever, the Governor’s announcement is an exciting step forward in the process of making internet access a reality for all Virginians,” said Alan Bradshaw, vice president of Strategic Partnerships for Dominion Energy. “Partnerships like this one show that when we work together, we can make a real impact, and we’re proud to work with our partners to bring this service to the communities we serve.”

SPDC’s Executive Director, Deborah Gosney, commented, “Early on, DHCD encouraged applicants to think big and this led to our creating a regional partnership including Brunswick, Halifax, Mecklenburg and Charlotte. An application and project of this scale is daunting but adding EMPOWER to our partnership ensured a strong and ultimately successful application.”

Previous grant awards have been instrumental in expanding the EMPOWER network, including multiple VATI and CARES awards, with fiber construction currently underway in Halifax County. The most recent funding will include 3,990 additional locations across Halifax County. Stanley Brandon, chairman of the Halifax County Broadband Committee stated, “Bringing high speed broadband to our communities has been a journey. But with perseverance and a committed partner in EMPOWER Broadband … we’re getting results. This award is a huge step in delivering solid broadband to our unserved citizens.”

In 2018, EMPOWER Broadband received a Tobacco Region Revitalization Commission grant to construct a fiber backbone crossing the southern portion of Charlotte County. Both Charlotte County and EMPOWER wanted to leverage these existing facilities. Charlotte County is not one of the SPDC’s member counties; however, County Administrator Dan Witt has close ties with his associates in Mecklenburg and Halifax counties. Witt stated, “I want to thank the SPDC staff for allowing Charlotte County to participate in their VATI application. Like our neighboring counties, Charlotte has worked diligently to bring high-speed broadband to our residents and businesses. Often, we are most successful when we collaborate and seek a regional solution. By joining the SPDC in this application, once again we won individually and collectively … but best of all our people benefit.” The SPDC award includes 401 locations in Charlotte County.

This grant will be a significant contribution to enhance EMPOWER’s ability to deliver universal service coverage to the region and combines Federal Connect America (CAF) and Rural Digital Opportunity (RDOF) Fund awards. Additionally, EMPOWER is awaiting final approval for a USDA infrastructure loan covering nearly 3,000 locations in the Telecom area of southern Mecklenburg and Brunswick counties. Engineering has been completed for this Telecom area and construction will parallel the DHCD Virginia Telecommunication Initiative (VATI) award. Detailed maps and timelines are forthcoming.

By working collectively and cooperatively, the opportunity for state funding was more attainable, as evidenced by the awarding of this VATI grant. The goal of MEC and its subsidiary, EMPOWER Broadband Inc., was to ensure the Members of MEC and its nearby communities received a permanent solution for affordable, true high-speed broadband. Fiber-to-the-premises deployment is the preeminent solution that affords an expansive and efficiently upgradeable network for generations of Southside Virginians.