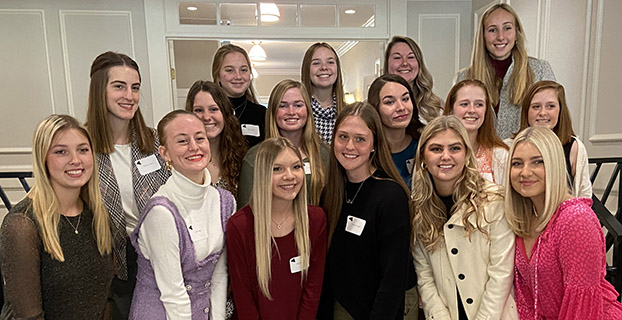 It is with great pleasure that The Holly Ball Committee releases the names of the twenty-nine young ladies who will be presented at the 125th Tidewater Assembly Holly Ball. The Ball will be held at Indian Creek Yacht and Country Club on Dec. 28 at 7 p.m. This event dates to 1895 and has been continuous in its running, with the exception of a time period during World War 1 and that of 1942-45 during World War 11. In 2020, as we experienced the Covid pandemic, it was determined that a cancellation was in order. This year’s Ball will incorporate the Presentation of the 2020 and 2021 Debutantes, the pairing of two groups of Debutantes being a first in the history of this long-standing Northern Neck Yuletide event. We have been looking forward to hosting this Ball for over a year and are hopeful that the Debutantes and all guests will enjoy the most festive and well-attended Holly Ball in its 125 year history!

On Saturday, Dec. 27 the debutante season was initiated as members of the Holly Ball Committee hosted a Coffee at Indian Creek Yacht and Country Club for Debutantes and their mothers. On a brisk winter morning all were so excited to be present, getting to know one another and orienting to the events of the upcoming Holly Ball season.

The events scheduled and hosted during the debutante season unite these young women and foster a spirit of altruistic advocacy. They inspire the formation of new and genuine lifetime friendships among like-minded women who wholeheartedly endorse returning gifts bestowed upon them in a generous and charitable fashion.

Also present for the Coffee was presiding Queen of Holly Ball 2019, Elizabeth Anne Kellum and her mother Julie Barrack. Elizabeth greeted all and described what her experience as the Queen of the Holly Realm had meant to her. She discussed the community project she developed as a liaison with Lancaster, Northumberland and Richmond County Sheriffs’ departments to provide young children of adults who had been detained with art supplies, stuffed animals, books and other sources of comfort while a parent or other adult is undergoing a process in one of those Sheriff’s offices. Queen Kellum will reign as Queen of the 125th Holly Realm. Miss Kellum is the daughter of Mr. and Mrs. Thomas Ellery Kellum of Reedville and Mr. and Mrs. Gray Barrack of Farnham.

The twenty-nine young ladies who will make their debut on Dec. 28 at the 125th. Holly Ball include Grace Adelaide Algeier, a student at The College of William and Mary, daughter of Dr. Rhonda and Austin Joseph Algeier of Charlotte Court House.