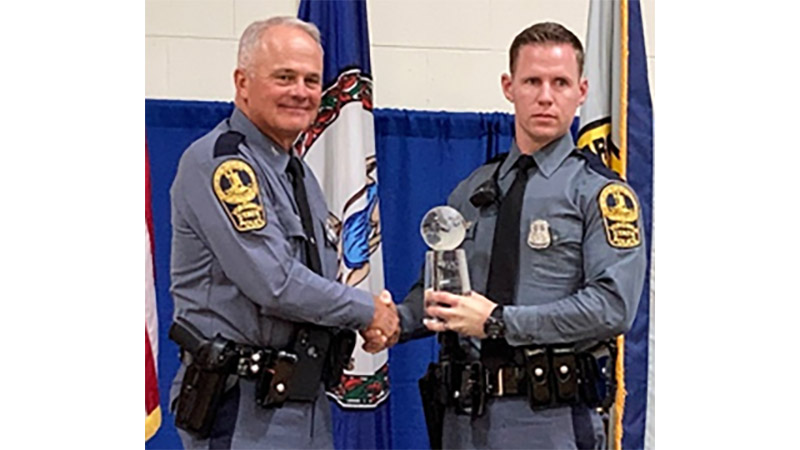 Trooper Davis, who is assigned to the Area 22 Office in the VSP Appomattox Division, was recently presented his award by Colonel Gary T. Settle at the VSP Superintendent Awards Ceremony in North Chesterfield County.

The IACP Leadership in Looking Beyond the License Plate Award recognizes the dedication and initiative of individual police officers whose daily efforts during traffic stops play a large part in preventing additional, more severe crimes. This award is designed to substantiate and document the importance of license plates as law enforcement tools and recognize officers who use license plates to prevent and detect both civil traffic violations and further criminal conduct.

The traffic stop took place April 23, 2020, along the southbound lanes of Interstate 85 near South Hill. The purpose for the traffic stop was initially for a speeding violation of 84 mph in a posted 70 mph zone. Upon his approach of the vehicle, Trooper Davis observed a homemade, paper license plate taped to the upper left-hand corner of the rear window. The license plate information and title the driver presented to him did not match nor were valid, which led Trooper Davis to further investigate and uncover the illegal credit card theft and skimming operation.

Trooper Davis, 32, joined the Virginia State Police in July 2018 as a member of the 129th Basic Session Academy Class. He has been assigned to Area 22, which encompasses South Hill and the counties of Mecklenburg and Lunenburg, since graduating from the academy.

The IACP award announcement described the investigation as follows: Trooper Davis has pursued a path of valor, service and leadership. Trooper Davis’s traffic stop on a minivan and the legal search of the vehicle ultimately uncovered a credit card theft ring that was operated by two foreign nationals residing in New York. The search of the vehicle yielded the discovery of a large bag containing a credit card skimmer, 14 debit/gift cards and $140,000 in U.S. currency. Trooper Davis proactively contacted the United States Department of Homeland Security (DHS) to determine if the agency had any intel or interest in these two individuals. An agent was dispatched to respond to the scene. The DHS agent ran all the cards through a mobile scanning device and determined that seven of the cards had been rewritten with stolen credit card identifications. Trooper Davis also contacted the VSP High-Tech Crimes Division for analysis of cell phones and other electronics seized from the vehicle to bolster his case and assist the federal agents with their investigation. Trooper Davis pursued state charges while a grand jury indicted both individuals on more than six felony charges.