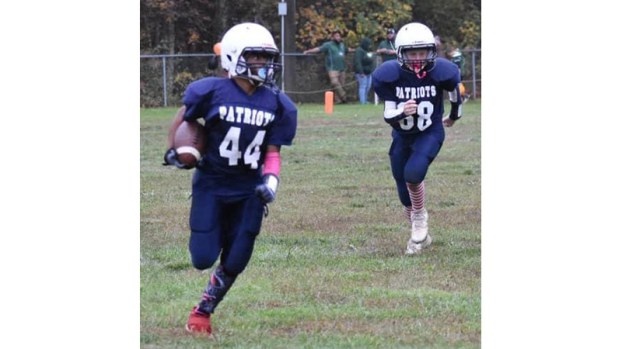 Alex Gee with a big run for a score. 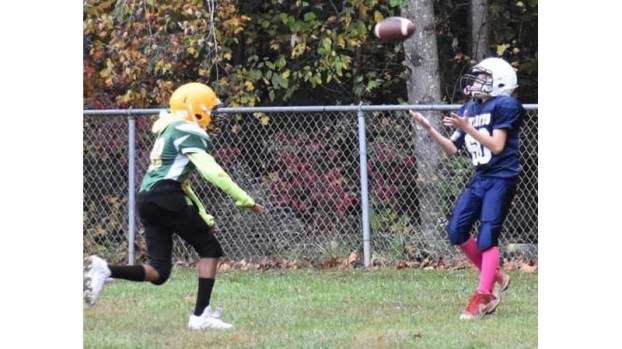 Cole Toombs makes a nice reception for another Patriot touchdown.

Last weekend was a busy one for the Charlotte County Patriots.

This past weekend, Charlotte County Patriots JV football team soundly secured a trip to the James River Southside Super Bowl by beating the Buckingham Knights. The Patriots had to travel to Buckingham’s home turf and face them on a cold, wet day. However, it was apparent in the first two minutes of the game that the bad weather and home field disadvantage weren’t going to discourage Charlotte as they scored on their opening drive. Charlotte kept command of the game and went to halftime with a 32-0 lead. During the second half, the Patriots slowed their momentum down a little to score one final touchdown, making the final score 38-0. The Super Bowl will be played at Buckingham High School on Nov. 13th. The JV game will start at 12 p.m.

The Charlotte County Patriots varsity team faced a tough opponent in the Emporia Renegades last Saturday. Having played each other before, both teams were prepared. Charlotte got off to a slow start and Emporia went to halftime with a 21-point lead. The Patriots came to life during the second half. Tucker Hazelwood made a fumble recovery. Jon Harvey intercepted an Emporia pass, which then allowed Saivion Street to score the Patriot’s only touchdown. The defense tightened up as well, holding the Renegades to only one second half touchdown. Von Harvey and Trey Tucker made spectacular tackles. The entire team played their best for every minute of the game. Unfortunately, the Patriots couldn’t overcome the deficit (final score: Emporia 27 – Charlotte 6) and finished the season as the playoff runner-up. The Patriots Varsity team also won the league Sportsmanship Trophy, showing once again that winning and sportsmanship can go hand-in-hand.

In last week’s article, “Patriots Head to Playoffs,” one player’s name for the flag team picture was left out. Front row, far right is Harrison Hughes.