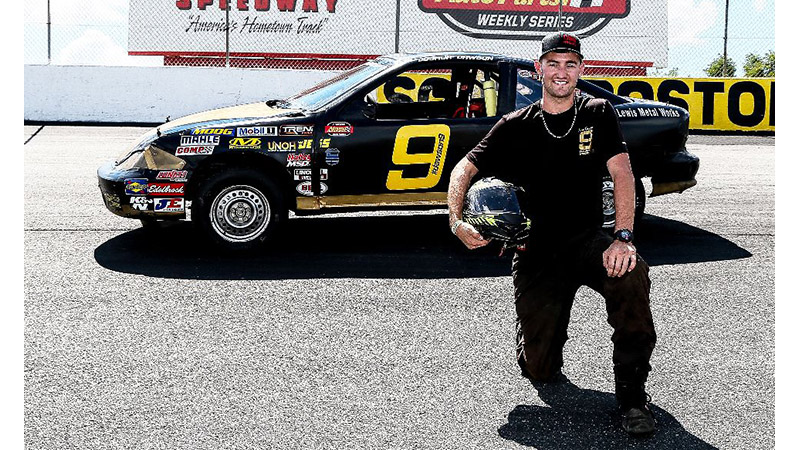 Josh Dawson of Halifax captured his first career NASCAR track championship in 2021, winning the Budweiser Hornets Division title at South Boston Speedway. Dawson won eight of his 10 starts at South Boston Speedway, setting a new division record for the most wins in a single season. In addition, Dawson, with a total of 10 career wins in the division, set a new record for the most career wins in the division.

Photo and story by Joe Chandler

With eight victories in his 10 starts this season, the Halifax resident won his first career NASCAR track championship, finishing the 2021 season with an 84-point edge over his cousin, Jared Dawson of Nathalie.

While the records are big accomplishments, the division championship is most special to Dawson.

“This championship means the world to me, my dad, and everybody that helps me,” Dawson said.

“I’m just glad I could pull it off. I had a lot of lucky nights.”

Dawson’s rise to the top of South Boston Speedway’s Budweiser Hornets Division has been a steady climb. He finished sixth in the division points chase in 2018 and improved to a third-place finish in the final point standings in 2019, riding on the strength of his first two career wins and 11 Top-Five finishes in a dozen starts. There was no racing at South Boston Speedway in 2020 due to the COVID-19 pandemic. Dawson returned to his home track in 2021, won eight races, finished in the top five in all 10 of his starts and captured the division championship.

“This is my third season of racing in the Budweiser Hornets Division here at South Boston Speedway, and I’m surprised I got this good as fast as I did,” Dawson remarked.

“I had a lot of lucky nights,” he added.

“I couldn’t be happier.”

Dawson had no idea he could have the kind of season he enjoyed in 2021.

“I’m just as surprised as everybody else is,” Dawson remarked with a grin.

Dawson pointed out winning the last race of the season and coming away with the division championship removed a lot of pressure.

“It’s a whole lot of stress coming off my shoulders,” he said.

The Halifax resident points out he is constantly learning every time he comes to “America’s Hometown Track.”

“Every time I come to the racetrack I learn something from somebody,” explained Dawson. “Eventually, all of it has added up, and everything I have learned has been just enough for me to win the championship.”

There was good competition in the Budweiser Hornets Division at South Boston Speedway this season, and it was a tough battle for Dawson to win the division championship.

“There have been a few cars that have given me trouble every week,” Dawson noted.

“In the last race, coming all the way from last place to the front was tough. I just give it my best every race and hope for the best. That’s all you can do.”

With the Budweiser Hornets Division championship and new records under his belt Dawson plans to move up to a higher division next season.

“My plan right now is that I am either going to move up to the Limited Sportsman Division or to the Late Model Stock Car Division,” Dawson said.

“I’ve already got a car lined up. I just haven’t decided which class I want to race it in.

The Country Roads Truck Show, featuring a wide variety of vehicles, will be held Sunday, Sept. 19, from noon – 5 p.m. in the infield area at South Boston Speedway.

With the wide range of vehicles that will be on display, the Country Roads Truck Show is an event car and truck enthusiast do not want to miss. Along with 18-wheel big rig trucks, visitors to the show will also see classic and muscle cars, rat rods, pickup trucks, low riders, ATVs and much more.

Gates will open at 11 a.m. Tickets are priced at $15 each for spectators and $30 for showing and will be sold only at the gate on the day of the event. The only gate open for spectators and participants to enter the event is through the speedway’s pit gate located in turn two.

This event is being hosted and promoted by Thorpe Money Ent., a North Carolina-based group that promotes numerous car shows in the region.