Shaun Phelps, a student in the industrial maintenance program at Southside Virginia Community College, will complete his Associate of Applied Science (AAS) degree at the end of the 2021 summer semester.

The occasion marks a significant milestone in his life’s journey, professionally and personally.

“On June 30, 2018, I was in a vehicle accident in my truck,” Phelps said. “I don’t remember the accident, but I’ve been told that I overcorrected on a curve and hit a tree. It turned out that the first responder was a friend who was also a volunteer with the fire department. He said I had been ejected from the truck and was pinned underneath the cab. I was in a coma for a month. I woke up in the hospital, clueless. I was in the hospital for two and a half months.”

At the time of his accident, Phelps was employed as a lineman with Dominion Power. His recovery and eventual return to work required an unswerving effort as he worked to overcome the effects of a traumatic brain injury and to restore physical abilities.

“Dominion was understandably cautious to have me return as a lineman, but I wanted to come back. I went to brain doctors, including one in Richmond who had studied brain injuries in the NFL.”

Finally, after being out of work for six months, Phelps received clearance to return to his job.

“People felt differently about me. There’s a stigma associated with brain injuries,” he said.

Phelps persisted in meeting high standards and eventually rose to the position of lead lineman.

“It is my job to help educate new trainees and to fill in when the supervisor is not there,” he said.

The job also requires a sharp eye and commitment to safety.

“You’re the one putting your hand on the wire,” he said. “You do what needs to be done.”

During a routine safety meeting, Phelps learned about a program at SVCC that offered linemen academic credit for their training and experience. Phelps saw the opportunity as a chance to prove his mental mettle.

“I wanted to challenge myself,” he said. “School has been great for me. Coming back from a brain injury helped me focus. I’ve learned a lot about myself, what I can tolerate and how to cope with challenges.”

One of those challenges involved learning how to retain information in areas outside his usual interests, such as mathematics.

“I had to learn about my limits and found that it helped to constantly write things down and re-read my notes. I have a scary stack of notepads, and I’ve gone through a lot of pens,” he said.

“My favorite classes turned out to be computer and communication classes. I learned how to make PowerPoint presentations, and I’ve been able to create some for people to learn at work during times such as rain days,” he said. “I also simplified some instructional materials to make it easier for new recruits to learn.”

With his lineman training and experience, Phelps needed to take only 12 classes to complete his degree.

“I was able to take them all online with a flexible schedule,” he said.

That was important because his work schedule places him on call 24 hours a day, seven days a week.

“There’s no way I could have scheduled regular classes,” he said.

Phelps began his college journey in May 2020. He will graduate this summer.

“Completing the work took a lot of self-motivation,” he said. “My wife and four kids look to me to help make their lives as best as possible. At my work station, I keep a picture of my truck after the accident and one of me in the hospital with all the tubes. These help me realize that there are more important things in life than to get upset. I also keep a paper my son wrote. He said, ‘When I grow up, I want to be like my dad. He’s a fighter and a survivor.’”

To others considering embarking on an academic journey, Phelps offers this advice.

“Never doubt yourself. They first thought I would need care 24 hours a day, but I walked out of the hospital on my own. The odds were stacked against me, but I’ve managed to make it through. When things get hard, buckle up. Tough times don’t last. Tough people do.” 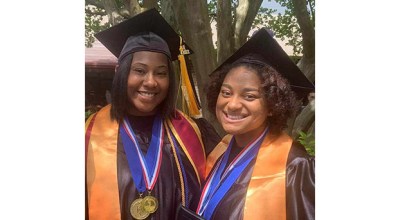