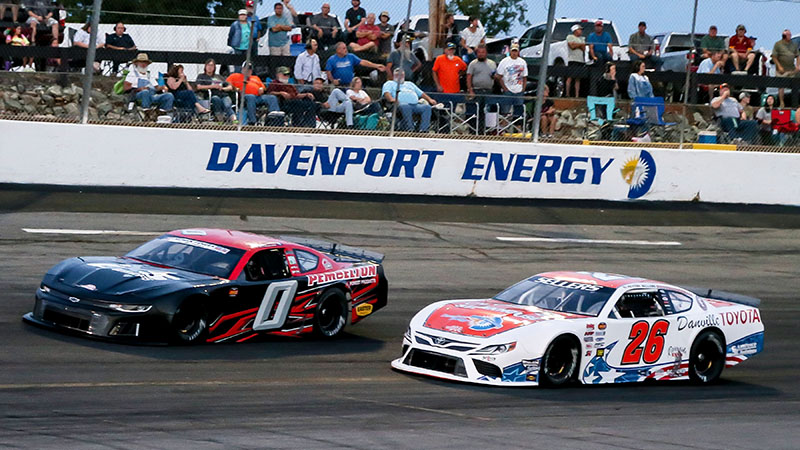 The young racer said it was special racing Sellers for the win.

“This is a big win, racing against Peyton Sellers,” Pembelton remarked. “We raced tooth-and nail, door to door. He used me up a little bit, and I tried to pinch him as hard as I could. We raced pretty hard to the end.”

The race was an exciting one, with Pembelton and Sellers swapping the lead three times. Pembelton led twice for a total of 47 laps. Sellers, from Ringgold, controlled the nightcap in earning his sixth win of the season at South Boston Speedway. He rallied from his seventh starting spot to take the lead from Stuart Crews of Long Island on the 13th lap. Once in front, Sellers led the rest of the race. Pembelton, who started eighth, sped past Borst to take second place with five laps to go and finished 1.44 seconds behind Sellers.

“It was a really good night,” Sellers said after the win. “Anytime you can go to South Boston Speedway and finish first and second, it’s a great night. We lost pretty big in the first race. We were pretty much in left field. H.C. (his brother and crew chief H.C. Sellers) made exactly the right change. When I fired off going into turn one on the first lap, I knew it was going to be a good car.”

Myers scored his first career Limited Sportsman Division race win in the opening 25-lap race and backed it up by winning the nightcap. He became the fifth different winner in the division this season with the sweep of the twinbill.

Myers and Ryan Joyner of Lucama, North Carolina exchanged the lead three times in the opening race with Myers taking the lead for the final time with 11 laps left in the race.

The second 25-lap featured another battle between Myers and Joyner, with Myers getting the upper hand with six laps to go and edging Joyner a second time, this time by a narrow .799-second margin.

Eversole finished third with Dawson and Obiedzenski rounding out the top five finishers.

“I could have never dreamed this,” Myers said with a huge smile. “Four years ago, when I started racing, I wanted to get one win in my career. To get two in one night is really special.”

Nathan Crews of Long Island scored his third win in a row and his ninth win in 10 starts this season at South Boston Speedway with his victory in Saturday night’s 30-lap Budweiser Pure Stock Division race.

Crews edged teammate and former division champion Daniel Shelton of Hurt for the win in his toughest battle of the season to date.

Josh Dawson of Halifax earned his sixth win of the season Saturday night, driving to victory in the 15-lap Budweiser Hornets Division race.

The victory gives Dawson wins in four of his last five starts. He celebrated his win by asking his girlfriend of four-and-a-half years, Alyssa Spencer of Halifax, to marry him in front of family, friends and the South Boston Speedway fans while in Victory Lane. Of course, he got a “yes” from his totally surprised future wife.

“I was trying to do it (propose) on July 3,” Dawson explained. “I didn’t win that one, so I had to hold it off until the next time I won.”

Next Race At South Boston Speedway

Advance adult general admission tickets for the August 21 event are priced at $10 each and may be purchased online on South Boston Speedway’s website, www.southbostonspeedway.com, through Friday night, August 20. Adult general admission tickets online and at the gate on race day are priced at $15 each. Kids ages 12 and under will be admitted free when accompanied by a paying adult.