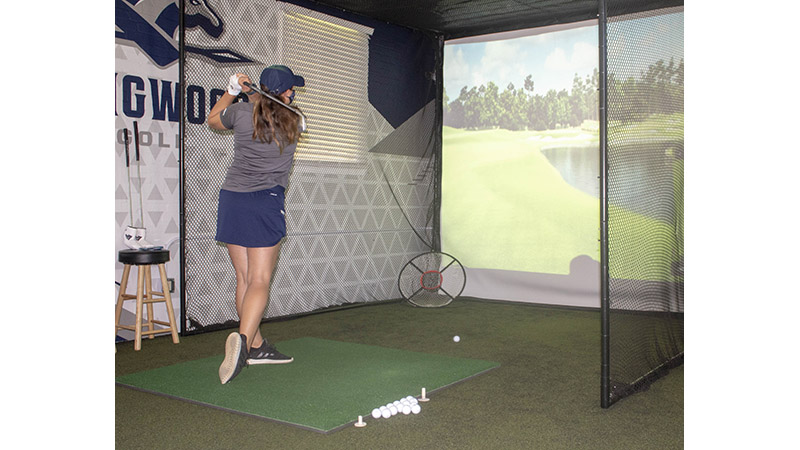 A $34,000 gift from Scott and Debbie Critzer has resulted in the men’s and women’s golf team having a new indoor training facility.

Made possible by the generosity of Deborah Mihm Critzer and K. Scott Critzer, the Longwood men’s and women’s golf programs now have a new state-of-the-art indoor training facility on campus.

A project that has been years in the making, the training center resides just outside Tabb Hall on the north end of Longwood’s campus in a facility whose renovation was made possible by a $34,000 gift from the Critzers.

“Longwood laid the foundation for our successful careers,” Scott and Deborah Critzer said, who were on hand to dedicate the facility in May alongside men’s head coach Kevin Fillman, women’s head coach Brittany Dabule and members of both golf teams.

“We decided what better way to give back than to fund the new Golf Performance Center. The new facility will allow both men’s and women’s golf teams real-time, technology-based swing data feedback and a 24-7 practice location to accommodate the schedules of the student-athletes. We’re honored to support our fellow Lancers. They deserve only the best.”

The TrackMan Golf Simulator is widely heralded as the standard of virtual golf training systems. Using Dual Radar Technology, the system analyzes multiple components of every swing instantaneously – including club speed, club path, face angle, loft, ball speed, spin rate and more – to simulate a ball’s landing position with an 18-inch degree of accuracy. The system provides real-time swing analysis for a player’s short and long game, as well as training protocols targeted to specific aspects of the game.

“As a direct result of their generosity, our men’s and women’s golf teams now have access to a training facility that rivals any at the collegiate level. Their support of Longwood golf provides an immediate enhancement to the student-athlete experience that will last for decades to come.”

The facility includes space to train all aspects of a golfer’s game, from putting to driving and everything in-between. The TrackMan provides access to more than 100 virtual courses from around the world, including storied venues such as Pebble Beach, PGA National and St. Andrew’s.

“The Performance Center allows us to do the things our golf team needs to do when conditions outside don’t allow for it,” Fillman said, who led the Longwood men to a tie for first place in last season’s Big South Championship stroke play round. “That’s the biggest advantage it gives us. On the occasions when we have had bad weather, we can hit both shots and putts while still being able to look at the numbers we use for game improvement.

“Our entire team is grateful to the Critzers for stepping up to help fund the facility. I met Scott and Debbie not long after I arrived 24 years ago, and they’ve been extremely supportive of our program and what we’re trying to do ever since. Their generosity has always been amazing and much appreciated.”

The Longwood Golf Performance Center will further the growth of Longwood’s men’s and women’s golf programs, who shined in postseason play in 2021. On the men’s side, the Lancers finished stroke play in a tie for first place and a program-best third place in the tournament overall, while senior Brandon Weaver ended in a tie for second in stroke play, matching a program record. On the women’s side, both Diana Domenech and Emma Landis shined at the Big South Women’s Golf Championship and made this year’s tournament the third straight in which two women’s golfers finished in the top 25.