Backstrom among the best in softball-rich Virginia 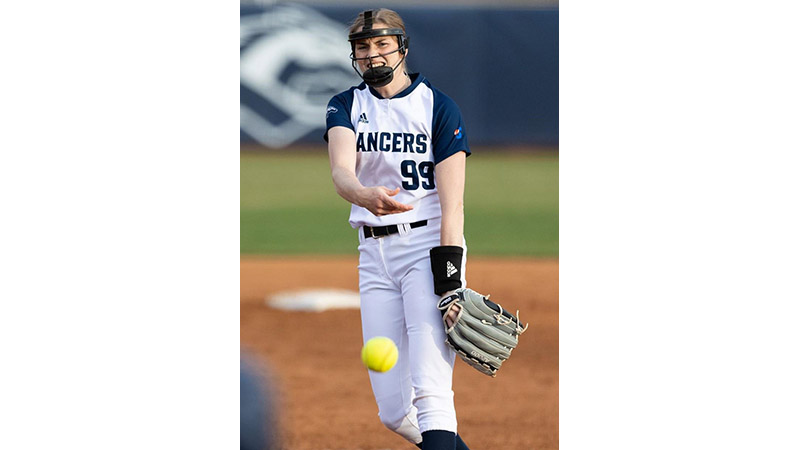 Already voted the best pitcher in the Big South in 2021, Longwood senior Sydney Backstrom is now officially one of the best in the softball-rich commonwealth of Virginia.

Tuesday the Virginia Sports Information Directors (VaSID) organization announced Longwood’s senior ace as a VaSID All-State selection, placing her on the second team of a statewide lineup that includes players from three teams that reached the 2021 NCAA Softball postseason.

The 2021 Big South Pitcher of the Year, Backstrom is in elite company on the VaSID All-State Team, selected as one of only seven pitchers on the team alongside All-Americans Odicci Alexander of James Madison and Keely Rochard of Virginia Tech and fellow commonwealth standouts Kirsten Greene (Norfolk State), Alissa Humphrey (James Madison), Karlie Keeney (Liberty) and Emily Kirby (Liberty).

The VaSID All-State citation is the latest of several awards this season for Backstrom, who along with her Big South Pitcher of the Year nod was named to the All-Big South first team and the NFCA All-Region third team. This year’s all-state honor is the third of her career, following a first-team honor in 2020 and a second-team selection in 2018.

Also crowned the Longwood Female Co-Athlete of the Year, Backstrom logged a 2.34 ERA and led the Big South with 19 wins, a .185 opponent batting average and 189 strikeouts. She also ranked among the top three nationally with 209.2 innings pitched, 25 complete games and 34 starts while throwing more than 60% of Longwood’s innings.

The 6-1 Backstrom was even better in Big South play, going 11-3 with a 1.76 ERA during Longwood’s run to a third-place finish in the Big South standings. She was the winning pitcher in 11 of Longwood’s 14 conference victories, including three shutouts.

Included among those shutouts was a seven-inning perfect game on April 19 against Presbyterian that was the first such performance in Longwood softball history. Backstrom retired all 21 batters she faced in that effort, striking out nine and needing just 79 pitches to tear through the Blue Hose lineup. The performance also earned her one of four Big South Pitcher of the Week citations on the year, which was a Longwood record for one player in a single season.

Backstrom, who already ranks among Longwood’s all-time top 10 in wins (59), strikeouts (471), innings (608.1), complete games (53) and no-hitters (2), will return to Longwood in 2021-22 to play her final season with the Lancers and pursue her Master of Business Administration in the Longwood College of Business and Economics (CBE).