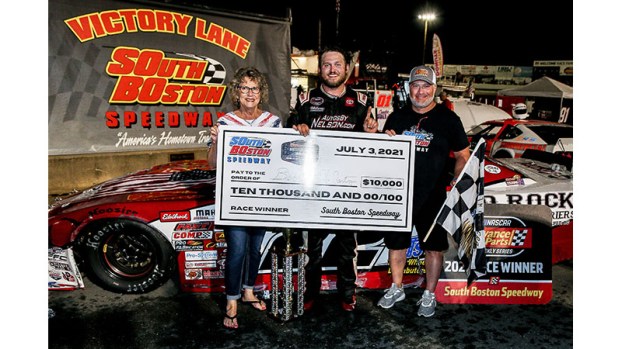 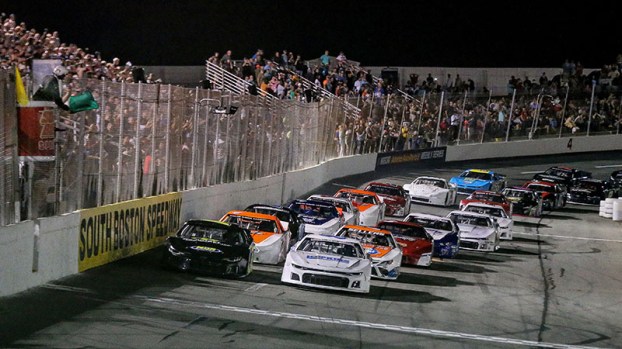 Bobby McCarty surged past Peyton Sellers on a restart with three laps to go and edged Sellers by just over a second to win Saturday night’s Thunder Road Harley-Davidson 200 in front of a packed house at South Boston Speedway.

The win was worth $10,000 to McCarty, who snapped Sellers’ win streak in this event at two in a row.

“I love that more than anything,” McCarty remarked after taking the win in South Boston Speedway’s showcase NASCAR Advance Auto Parts Weekly Series Late Model Stock Car Division race. “To be able to come here and go head-to-head with him caution after caution and come out on top is really special. It means a lot.”

Track position was the name of the game over the final half of the 200-lap race that was the opening race of the Virginia Late Model Triple Crown Series which also includes the July 24 Hampton Heat 200 at Larry King Law’s Langley Speedway and the ValleyStar Credit Union 300 at Martinsville Speedway on Sept. 25.

Starting on the outside lane all three times, McCarty was able to work his way past Sellers on all three restarts that followed caution periods in the final 20 laps of the race.

“Bobby had track position. He needed it. He had the top side, and that’s where I needed to be. I had fired off a few times earlier in the race, and the outside lane rolled really well.

“At the end of the day, we had a solid night. We’ll take a second-place finish and move on.”

The race was a highly competitive one, with three drivers swapping the lead four times. McCarty led the final 98 laps of the race after taking the lead from Sellers on lap 103. Looney led twice for 84 laps and Sellers led twice for a total of 18 laps. Twenty-two cars finished on the lead lap.

Moss edged Ryan Joyner by .721-second in the event marred by eight caution periods. His flag-to-flag win was his fourth victory of the season at South Boston Speedway.

Eric Winslow of Pelham, North Carolina, who won this event in 2019 and won the $250 R&S Race Cars Pole Award for the race, finished third. Brian Obiedzenski of Franklinton, North Carolina and Daniel Crews of Long Island completed the top five finishers in the 16-car starting field.

Nathan Crews of Long Island scored his eighth victory of the season Saturday night in the 30-lap Budweiser Hornets Division race and had a big payday in the process.

Along with collecting the winner’s prize, Crews pocketed a $220 bounty that had been posted by anonymous race fans, a $200 bounty posted by LA Paving Company and the R&S Race Cars $250 Pole Award for winning the pole for the race.

“This is the first time I have won this race in 13 years,” Crews said.

“In fact, this is the first time I have finished this race.”

Crews started on the pole and led every lap, edging Johnny Layne of Halifax by 1.147-second to secure his eighth win in nine starts at South Boston Speedway this season.

Randy Hupp of Halifax finished third with Jared Dawson of Nathalie, Virginia and Jimmy Wade of Halifax rounding out the top five finishers.

Jared Dawson of Nathalie surged past Kevin Currin of Chase City on the final lap to win the 20-lap Budweiser Hornets Division race. The win was Dawson’s second victory of the season.

Dawson’s win snapped a three-race win streak that had been compiled by Josh Dawson of Halifax. In winning the race Jared Dawson collected a $300 bounty posted by Italian Delight Family Restaurant and Matthews’ Towing that had been established for a driver that could defeat Josh Dawson.

Josh Dawson, who finished third behind Jared Dawson and Currin, won the R&S Race Cars $100 Hard Charger Award for the driver that gained the most positions in the race. Andrea Ruotolo of South Boston and Dillon Davis of Nathalie rounded out the top five finishers.

Practice will begin at 4 p.m., and grandstand gates will open at 5:30 p.m. Qualifying will start at 6 p.m., and the first race will get the green flag at 7 p.m.