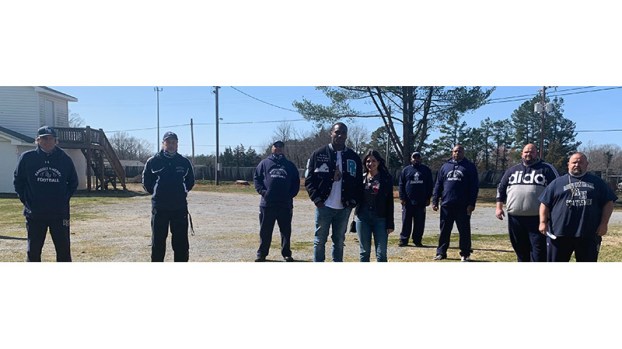 Reed returns to talk with Statesmen

Randolph-Henry High School (R-H) alum Joe Reed (middle), who recently completed his rookie NFL season as a member of the Los Angeles Chargers, made time Saturday, March 20, to stop in and speak with current Statesmen football players and coaches prior to their homecoming game, which they won 42-0 against Cumberland County High School. “Joe’s main message was two-fold,” R-H Assistant Principal and Athletic Director Christopher Holt said. “‘Make sure that you have fun playing. You are making memories that will last a lifetime here at R-H.’ He stated that some of his fondest memories occurred right there in that R-H football stadium.” Holt said Reed reached out about a month ago and wanted the opportunity to address the team. “We were thrilled to host he and Holly (Leinz),” Holt said. “Joe is such an inspiration to so many in our community. His success and first-class representation has been shared by so many over the years. We are so proud of him and know he will continue to make history.”