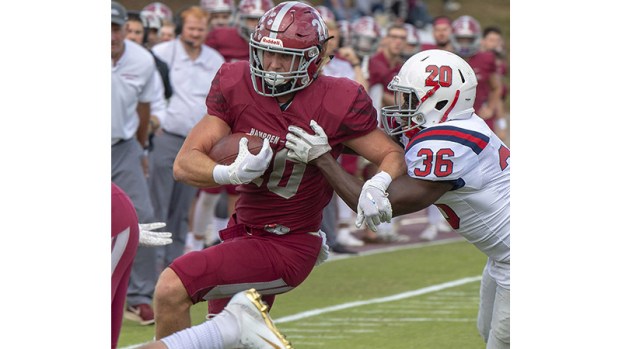 Hampden-Sydney College tight end Ed Newman, a former Fuqua School standout, has been having an outstanding senior season with the Tigers. He led them with six catches for 151 yards and a touchdown Friday, March 19, in a 43-12 road win. (Photo courtesy of Hampden-Sydney College)

H-SC scored on its first possession of the game when Frost scored on an 18-yard touchdown run at 9:02. Frost added a two-point conversion run and the early lead was 8-0. Newman had a 27-yard reception on the drive, and Costello had a 13-yard catch as well.

The Tigers made it 15-0 with another score on their second possession, this time a 54-yard touchdown pass from Bernard to Page. Sophomore placekicker Jack Breedlove added the point after touchdown (PAT) at 6:27 of the opening quarter.

GC managed the first score of the season against H-SC on a 1-yard touchdown run at 1:53, but the PAT was no good, and the visitors led 15-6 after 15 minutes.

The Tigers added another touchdown at the 10:19 mark of the second quarter after senior defensive end Tyler Lohman forced a fumble deep in GC territory that was recovered by junior linebacker Peyton Carneal at the 1-yard line. Frost promptly found the end zone for his second touchdown, and Breedlove added the PAT for a 22-6 advantage.

H-SC scored again with 5:18 left in the quarter when Bernard and Newman connected on their 85-yard scoring pass play. The PAT was no good, and the score was 28-6.

The Quakers added a late first-half touchdown on a 2-yard scoring run at 1:34, but the Garnet & Grey blocked the PAT, and junior cornerback Jordan Fields picked up the loose football and ran it back 98 yards for the two points to make it 30-12.

The Tigers weren’t done yet for the half, adding another touchdown with just 17 seconds remaining before the break on a 13-yard pass play from Bernard to Costello. Breedlove’s PAT gave the visitors a 37-12 advantage at halftime.

The third quarter was scoreless between the two teams before H-SC added a final touchdown in the fourth quarter when Jones scored his first collegiate touchdown on a 3-yard scoring run at 5:55. The PAT failed after a bad snap on the attempt, providing for the final 43-12 margin of victory.

Tigers senior linebacker Brendan Weinberg had nine tackles, including one for a loss and a sack. Freshman defensive back Will Pickren had eight tackles, one interception — his collegiate first, caught in the third quarter — and two pass breakups. Carneal added seven tackles, one forced fumble and a quarterback hurry. Junior linebacker Stephen Cash and sophomore defensive back Will Shulleeta each contributed five tackles.

The Tigers avenged a 37-27 setback at GC during the 2019 season and have now won 19 of 21 games against the Quakers under the guidance of 21st-year Head Coach Marty Favret.

Hampden-Sydney will return home to welcome ODAC member and archrival Randolph-Macon College (3-0, 3-0 ODAC) on Saturday, March 27, at 1 p.m. in the 125th edition of “The Game” on Fulton Field at Lewis C. Everett Stadium.

“The Game” is a reference to the Tigers-Yellow Jackets rivalry being the oldest small-college football rivalry in the south.

It took six innings to warm them up, but for the Longwood University softball team’s bats Sunday, March 21, at... read more