Rathgeber: ‘I have had a blessed life 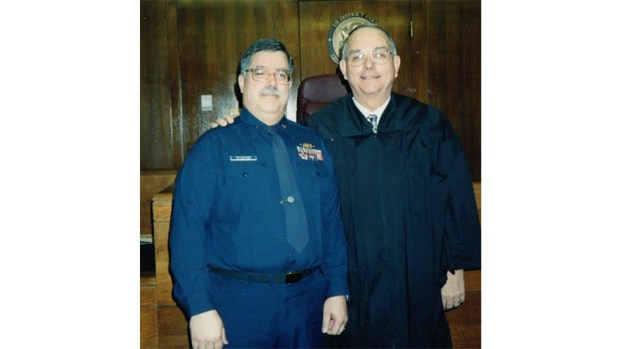 On his final job in the U.S. Coast Guard in this 1999 photo in Portland, Maine, Charles Rathgeber, left, was serving in the Marine Safety Office as senior investigating officer, working with Judge Peter Fitzpatrick, right. 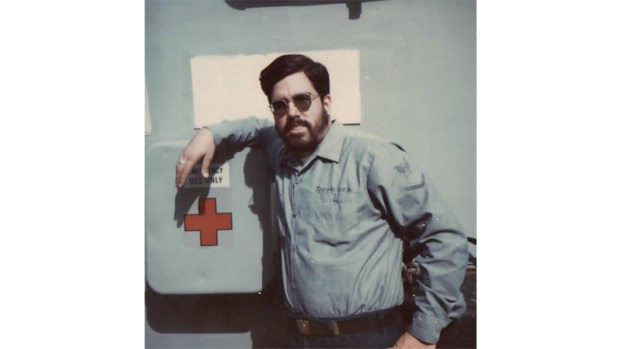 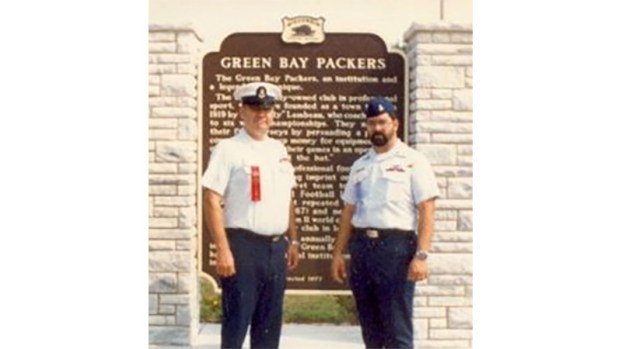 This picture of Charles Rathgeber, right, is from when he was in the Coast Guard in 1981, attending a convention for chief petty officers with Chief Dan Loudermilk, left, in Green Bay, Wisconsin. 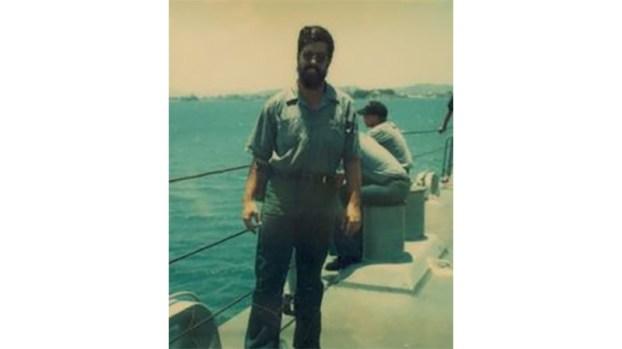 Standing on the deck of the USS Patterson (FF-1061) is Charles Rathgeber during his four-year term of service in the U.S. Navy, a term that spanned from 1972-75.

Charles Rathgeber, of Charlotte County, is a veteran of two branches of the military who finished with more than 26 years of service combined.

With the possibility of being drafted looking likely, he decided to preemptively join to give himself more control over what it was he ended up getting to do in the military.

“I spoke with a Navy recruiter, did my four years in the Navy and got out,” he said.

He was attending Keene State College in Keene, New Hampshire, when he joined the U.S. Navy in 1972.

“My father had served in the Navy in World War II, so that’s what kind of led me to go talk to the Navy recruiter rather than anybody else,” Rathgeber said.

Though he did not end up having to participate in combat during his 26-plus years in the service, Rathgeber came the closest to it in 1974 during the Cyprus invasion.

“We were part of evacuating American civilians from Cyprus when Greece mobilized,” he said. “We were actually in a dry dock in Greece when all that nonsense started.”

By the end of his term in the Navy, he had advanced to E-5, petty officer second class, as an electrician’s mate.

After he was out of the Navy for a year, he and his family were finding life to be quite difficult.

He noted he had already held a good occupation with the military, so the matter became a point of discussion with him and his family.

“We discussed it quite a bit, and that was my option that I picked was to go back in the service to a known entity that takes care of you, and I had a profession that the Coast Guard was very interested in, so I think it worked out,” he said.

He spoke to a U.S. Coast Guard recruiter, and he learned they were looking for electricians at that time in February 1977.

“So I was able to get right in the Coast Guard, and we never looked back after that,” he said.

Rathgeber saw a lot of the world while in the military. He was part of Med Cruises in both the Navy and Coast Guard, which involved travel on the Mediterranean Sea, allowing him to see a lot of Europe.

“And I did a temporary stint commissioning a Coast Guard cutter on the west coast and bringing it down through the Panama Canal,” he said. “So (on) the west coast of the country I’ve been to various places (and) a lot in the Caribbean with our Haitian and drug interdiction programs over the years.”

While in the Coast Guard, Rathgeber advanced to the level of E-8, senior chief.

“It was going to be a long wait for the E-9, master chief, in my particular specialty because of a political reorganization within the command,” he said. “And I got tired of waiting, so I went with what they called the Warrant Officer Program, and so I made it to Chief Warrant Officer 4.”

He was a subject matter specialist in his field and ultimately went from being an electrician to being a naval engineer.

Rathgeber said his time and experience in the military helped him immensely in life.

“A lot of times it put me outside my comfort zone,” he said. “Coming from a strict, New England-type background and then being assigned to be an instructor where you actually have to get up in front of a class, which kind of lends itself to public speaking and all that stuff, that was not something I thought I was ever going to do, but because I had to, I had to do it.

“And once I got it, I found that, ‘Hey, this is something I can do,’” he continued. “So I was able to advance well in the military. I was not a very good student up until then in public schools, which was one of the reasons that I was leaving college and becoming eligible for the draft, because I just didn’t apply myself.”

But he noted that once he realized the military had a lot to offer, he turned into a much better student.

“I’ve been to a lot of different military schools, which they credit you for,” he said. “Through a program that the Coast Guard probably still has, they contact the board of regents at different schools — mine happened to be the University of Phoenix — and they take your entire transcript of both your civilian and your military training and advise you what you would need to complete a degree.

“And so following their advice, I took the courses I needed to, so I was able to get an associate’s degree in electronics engineering.”

He affirmed he has been able to use that degree since getting out of the Coast Guard.

“I was able to secure a job offer,” he said. “So on a Friday afternoon in 1999, I had my retirement ceremony, and on Monday morning, I reported to my first day of work at a company called Spencer Press to be an electronics technician on their maintenance staff.”

This was in Wells, Maine. He found himself near there because of the final place he worked at while still in the Coast Guard.

“My final tour in the Coast Guard, what they call your twilight tour, I was assigned to a Coast Guard cutter in New Castle, New Hampshire, but they decided they were going to decommission the vessel before my tour was complete,” he said. “And so I was able to move up to Portland, Maine, in the Marine Safety Office.”

He served in the office as a senior investigating officer.

Spencer Press in Wells was about 12 miles down the road from where he was living.

Later, Rathgeber and his family decided to move to south central Virginia.

“Shortly after we were here, when I realized that I needed to go back to work, again I was able to use that (associate’s) degree to work for Gemini, which is over in Farmville,” he said.

He served as an electronics technician on that company’s maintenance staff.

“I actually retired to part time in 2017,” he said. “I did about a year part time, and then I finally retired for good in 2018, but now I’m involved in all kinds of volunteer stuff.”

Amid a strikingly polarizing time in America, politically, with shifting opinions about the country, Rathgeber took a moment to offer his evaluation of whether or not serving his country in the military was still a point of pride for him.

“I still believe my service is worthy of the country,” he said. “It just saddens me to see some of the things that are happening.”

He affirmed that if he had the opportunity to go back to the 1970s, he would absolutely make the same choices he did to join the military.

Thus far, he indicated he has avoided any major medical issues stemming from his time in the service, though he does think about it regularly.

“It’s always at the back of my mind because I’ve served on vessels that were built in the 1930s, so I know there was asbestos exposure,” he said. “Some of the cleaning solvents that we used over the years are the same thing as dry-cleaning solvents, and so there’s always that concern. But nothing really has manifested itself.”

He noted that running up and down steep ladders on a ship and standing on a metal deck all day long likely took somewhat of a toll.

“My lower extremities are probably aged a little more than anybody else of my age without having that experience, but I get up in the morning, and I’m happy,” he said.

He keeps busy these days volunteering for different organizations, including the Piedmont Area Veterans Council.

When recalling the ready opportunities afforded him in his civilian life by what he learned from his military experience, Rathgeber was compelled to make a simple statement.

To see the full Salute to Veterans edition click here.