‘Proud to have given what I could’ 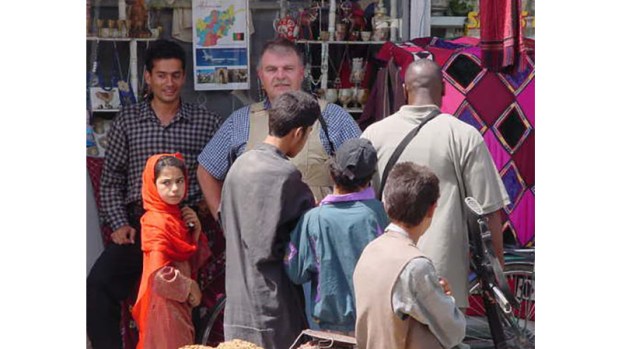 Charlotte County Board of Supervisors member Butch Hamlett has more than 40 years of service in the U.S. Army under his belt. Above is a photo of Hamlett in Afghanistan where was deployed shortly after the terrorist attacks of 9/11. 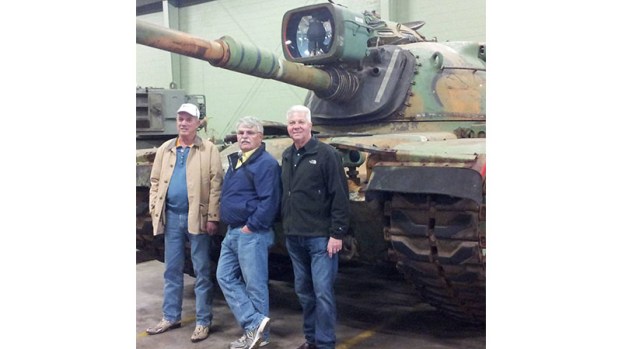 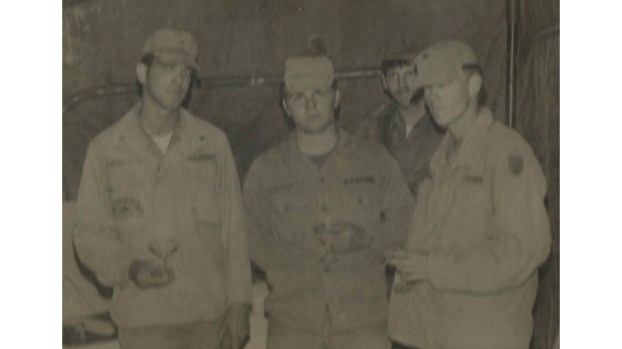 “Hamlett and his tank crew celebrate with a 3 a.m. glass of champagne after their first tank gunnery qualification. Pictured in the foreground, from left, are Sgt. George, Hamlett and Specialist Fourth Class Palmer. Standing at the back is Private First Class Harris. “

Garland “Butch” Hamlett, 67, of Charlotte County, says he was destined to be in the military from a very young age.

Hamlett volunteered to join the U.S. Army on Dec. 15, 1971, leaving for basic combat training June 19, 1972. He completed advanced individual training at Fort Knox, Kentucky, and was selected to attend the M551 Sheridan Armored Airborne Reconnaissance Assault Vehicle School  for an additional three weeks at Fort Knox and afterward was on leave while delayed enroute to Fort Dix, New Jersey for shipment overseas.

Hamlett arrived in Frankfurt, Germany on Thanksgiving Day of 1972, where he was assigned to the eighth infantry division, second brigade, bravo company, second battalion 68th armored regiment in the French sector at Baumholder.

From there, Hamlett advanced from private first class to specialist fourth class and was then promoted to sergeant after a little more than 18 months in the Army.

“I was the tank commander and was also the platoon sergeant just turning 20 years old,” he said. “I was responsible for five M60/M60A1 main battle tanks along with being responsible for the lives of 18 other soldiers.”

He also qualified his tank crew as “distinguished” at its annual gunnery, a process that takes approximately three to four months from start to finish.

When Hamlett’s active duty ended in June of 1975, he still had three years left as an obligation in the inactive reserve and was assigned to a reserve unit. He did a short stint in the Army National Guard and progressed up in the ranks to eventually be promoted to first sergeant.

Hamlett’s infantry battalion was deployed to Fort Sherman, Panama, approximately a year before Operation Just Cause in December of 1989 when the U.S. invaded Panama prompting regime change.

“Tensions were extremely high there,” he said.

In 1998, Hamlett graduated from Bluefield College with a bachelor’s degree in business. He also enjoyed many years spent as a baseball umpire with the Virginia High School League and coached summer baseball with the Dixie Boys and Major League, later going on to win two state championships and bringing his team to the Dixie Boys Major League World Series. He served as the district director of baseball for a six-county geographical area and was a charter member of the Virginia Dixie Boys and Major League Baseball, Inc.

Hamlett later transferred to the U.S. Army Reserve and served in several units, including a training and evaluation unit assessing National Guard units in New Jersey. He ultimately ended up at Fort Pickett, Virginia, in the 377th Chemical Company as the operations and training sergeant, later retiring from this unit in November of 2000.

But life didn’t stay tranquil for long. The terrorist attacks of Sept. 11, 2001, occurred, and Hamlett received orders to return to active duty on April 13, 2002.

Hamlett’s life was about to see a lot of changes. With two weeks to get ready to transition back to active duty, he completed his refresher courses and had orders to report to the United States Central Command (USCENTCOM) at the MacDill Air Force Base in Tampa, Florida.

Hamlett was assigned to the Joint Security Directive (JSD) to Eskan Village in Saudi Arabia. From there, he was deployed to Afghanistan where he was assigned to a team of military members and performed anti-terrorism vulnerability assessments on Department of Defense (DOD) and Department of Security (DOS) facilities and hotels where U.S. diplomats and DOD personnel were housed.

He was then transferred to a mobile training and assistance team to train the Saudi armed forces  shortly before the 2003 invasion of Iraq.

During his assignment to the JSD, Hamlett travelled all over the area of responsibility for USCENTCOM, including parts of South West Asia.

He saw many things during his military career that stuck with him long after his service.

“The biggest effect of what I saw is how awful war is,” he said. “Afghanistan in 2002 was literally covered in land mines, rural areas in particular. They were planted alongside the roads from Kabul to Bagram, and we were warned not to change a tire if flat on the side (of the road) … IEDs (improvised explosive devices) were always a concern. The children suffered the worst in my opinion. Too many orphans when I was there.”

Hamlett officially retired from the U.S. Army March 20, 2014, with more than 40 years of service.

He now belongs to several veteran organizations, including Veterans of Foreign Wars (VFW) Post 8902, Vietnam Veterans of America and the Disabled American Veterans.

Now retired, he currently serves on the Charlotte County Board of Supervisors and lives in Drakes Branch with his wife, Julia, their beloved German Shepherd rescue dog, Deuce, three cats and the occasional back porch visitor, to include possums and the odd racoon.

He enjoys the company of his two grown children and five grandchildren.

When asked about the lessons he learned during his military career, Hamlett remarked that he was taught how to be a leader and how to interact with and respect others who have “walked the walk.”

“That does not always mean I agree, but my respect is there,” he said.

He found time spent away from family and missing important life events to be one of the more difficult aspects of serving.

“In January 2005, the U.S. Army contacted me via telephone ‘asking me’ if I’d ‘voluntarily’ reclassify to civil affairs and return to active duty,” he recalled. “At the time, I was still eligible to be recalled to active duty, but my father was terminally ill with cancer, so I told them my situation, and my father died in September. If my dad had not been ill, I might have taken Uncle Sam up on that offer for another expense paid vacation back to the sand box.”

The Army, Hamlett said, instilled in him an abundance of pride for his country, to which he describes himself as very patriotic and loyal.

“My oath never expires,” he emphasized.

And although he may change several things if given the chance, he’d certainly do it all over again if necessary.

“I took my oath to this country very seriously and was proud to have given what I could.”

To see the full Salute to Veterans edition click here.