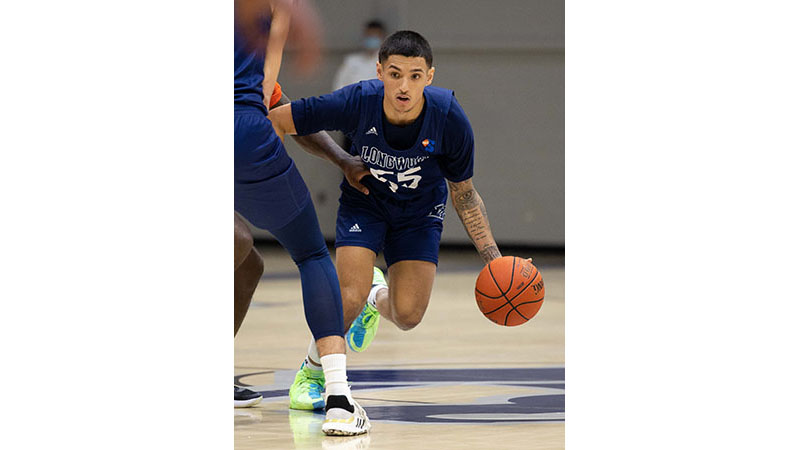 Two months ago, Longwood University’s men’s basketball team would have struggled to overcome the loss of an impact player like freshman point guard Justin Hill.

Now with the postseason just over a week away, the resurgent Lancers did just that and made history in the process.

With the three-time Big South Conference Freshman of the Week sidelined for the first time all season, Longwood pulled away from host Charleston Southern University 64-58 and set a program record with its 10th Big South win of the season.

The win was the Lancers’ fifth in a row and eighth in the past nine games, continuing an end-of-season surge that currently has them in sole possession of fifth place in the league standings.

The latest of those victories came on the strength of Longwood’s trademark Big South-leading defense and a team-wide scoring effort that produced four double-digit scorers, even without Hill, who entered the game as the Big South’s No. 2 freshman scorer at 11.3 points per game.

“I think the team right now is really focused on executing our defensive principles,” Longwood Head Coach Griff Aldrich said, who hit a milestone of his own one night prior with his 40th career win. “What you’re seeing right now is a high level of activity and a high level of competitiveness. I stole it from Dick Bennett, (Virginia men’s basketball Head Coach) Tony Bennett’s father, that the highest form of competition is execution. I think our guys are really executing, particularly on the defensive end, really well absent the three offensive rebounds we gave up at the end of the game.

“They’re really competing right now and bought into that, and it’s turned our season.”

That stifling defensive performance held Charleston Southern forward Phlandrous Fleming Jr., the Big South’s No. 3 scorer, to 6-of-20 shooting from the field and 2-of-12 from 3-point range. Fleming matched his season average with 19 points and picked up his second straight double-double, but it wasn’t enough to help the Buccaneers overcome 16 turnovers that led to 15 Longwood points.

Meanwhile, the Lancers knocked down nine 3-pointers and benefited from a multi-faceted attack that saw Juan Munoz (14 points), Jesper Granlund (12), DeShaun Wade (12) and Leslie Nkereuwem (10) all score in double figures. Wade knocked down 4-of-9 3-pointers and added three steals, while Munoz and Granlund both hit multiple treys and combined for four takeaways.

Longwood’s five-game win streak trails only Campbell’s six-game tear as the longest active streak in the Big South. It also serves as not only the longest-winning streak of Aldrich’s three-year tenure as head coach but the longest in Longwood men’s basketball history against Division I opponents.

“We believed this team was a really talented group and was playing good basketball even when the wins weren’t coming,” Aldrich said, who has now coached Longwood to its three winningest Big South seasons since the Lancers joined the conference in the 2012-13 season. “We talk a lot about pouring into the root and trusting the process, and I know it’s cliché, but they’ve really done that. Good things have started to happen, and I’m so excited they’re starting to see the fruit.”