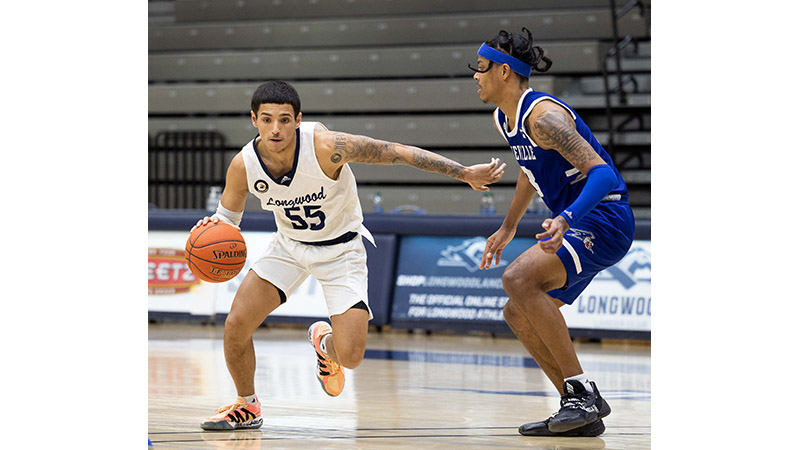 Last week Longwood University men’s basketball faced the best team in the Big South Conference, fought valiantly and lost twice to become the latest of many that undefeated Winthrop University has dispatched on its way to a perfect 13-0 record.

However, after the Eagles (13-0, 8-0 Big South) completed a regular-season sweep of the Lancers Friday night, Jan. 15, with a 70-50 win on their home court in Winthrop Coliseum, Longwood Head Coach Griff Aldrich used his postgame speech to put into perspective what his team had just endured.

“I told them there’s no disrespect in losing to Winthrop. They’re an outstanding mid-major basketball team, one of the best in the country,” he said. “But what I told them is that’s the standard right now. What our guys have to understand is they just played against the standard. I asked them, does Winthrop play hard? Do they take plays off? Do they execute poorly? When you make a run at them, how do they respond?

Whether Aldrich asked those questions rhetorically or not, Winthrop’s play in 2020-21 answers for itself. The Eagles entered the two-game series against Longwood armed with the No. 12 scoring offense in the nation and ended it as one of only six remaining unbeatens in NCAA Division I basketball. They have the nation’s No. 2 leader in assists in Chandler Vaudrin and the Big South’s highest margin of victory at 12.5 points per game, and they have won seven of their 10 Big South games by double digits.

The Lancers (3-13, 2-8 Big South) got a first-hand look at the high-powered Eagles again Friday, and despite holding them to their lowest-scoring output of the season for a second straight night, could not overcome a similarly stifling effort from the suddenly defensive-minded Big South frontrunner.

Outrebounding Longwood 38-27 and converting 17 turnovers into 16 points, the Eagles took charge on their end of the court to extend their winning streak to 18 games and overcome a Lancer squad that held them to a season-low 70 points. The trio of Michael Anumba, Adonis Arms and D.J. Burns Jr. shouldered the scoring load for Winthrop, each finishing in double figures, with Arms leading the way with 15 points.

Anumba’s performance at the line was part of a 19-for-21 shooting night at the charity stripe for the Eagles, which allowed them to overcome a Longwood defensive effort that held them to just 42.3% shooting (22-of-52) from the field and 29.2% (7-of-24) from 3-point range. Arms also hit 8-of-9 from the line, while Longwood, as a team, converted just five of its sparse nine free-throw opportunities.

The Lancers struggled to keep pace with Winthrop’s run-and-gun offense and were outscored 15-2 on the fast break. Winthrop’s aggressive defense created many of those opportunities, as the Lancers endured shooting woes for a second straight night to the tune of 39.2% shooting (20-of-51) from the floor and a 23.8% clip (5-of-21) from three-point range.

“This is a building process, and you want it to happen faster than sometimes it takes,” Aldrich said. “But if you want to talk about tonight (as an example), we again lost our minds on the offensive end. It’s the execution. Shots aren’t going our way and things are hard, so we just had a massive breakdown.

“The score’s 17-16, we’re right in the game, and then we get really frustrated and start taking bad shots, which turns into fast-break opportunities. We allowed our frustration to really break the game open for them. That’s a huge piece — that competitiveness, that mental toughness, to be resilient in the face of adversity. They made a run, they made things difficult for us in the first half, and we didn’t really respond.”

Longwood had a three-day break before returning to Willett Hall where it was set to host High Point University Tuesday, Jan. 19, and Wednesday, Jan. 20, at 6 p.m.

“We’re going to keep doing what we’re doing,” Aldrich said. “It’s a daily focus. There’s no magic pill we can give the guys to be focused on execution. It’s something that’s a process. It’s something we talk about daily, and we’ll continue to keep talking about it daily.