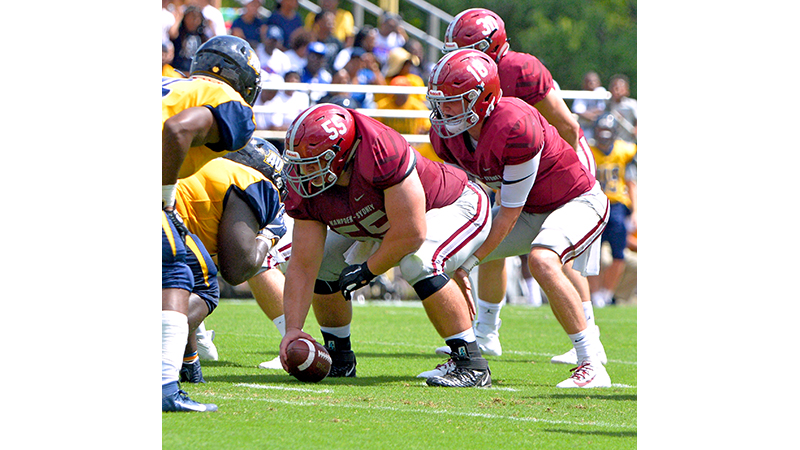 Hampden-Sydney College senior offensive lineman Tyler Howerton, No. 55, is the only finalist for the 2020 William V. Campbell Trophy who is from NCAA Division III as well as from a Virginia school. He is also one of only three finalists with a 4.0 GPA. (Photo provided by Hampden-Sydney College Athletics)

Hampden-Sydney College (H-SC) senior offensive lineman Tyler Howerton has been named one of 12 finalists for the 2020 William V. Campbell Trophy as announced recently by The National Football Foundation (NFF) and College Hall of Fame.

An H-SC athletics press release noted Howerton is the first-ever Hampden-Sydney finalist for college football’s premier scholar-athlete award that annually recognizes an individual as the absolute best in the nation for his combined academic success, football performance and exemplary leadership.

The 12 finalists will each receive an $18,000 postgraduate scholarship as a member of the 2020 NFF National Scholar-Athlete Class.

Later this year, one member of the class will be declared the winner of the 31st William V. Campbell Trophy and have his postgraduate scholarship increased to $25,000.

The 12 finalists were selected from a record 199 semifinalists nationwide from among all NCAA divisions and the National Association of Intercollegiate Athletics. Howerton is the only finalist from NCAA Division III as well as from a Virginia school. He is also one of three finalists with a 4.0 GPA.

“Tyler is a perfect example of the term student-athlete, as he excels at such a high level in both academics and athletics,” H-SC Director of Athletics Chad Eisele said. “He is so well-deserving of being named a finalist for the prestigious Campbell Trophy. Obviously, we are all extremely proud of Tyler, his accomplishments and the way that he represents Hampden-Sydney College.”

Howerton is a dean’s list student majoring in physics with a minor in mathematics. He has been named a 2020 Barry Goldwater Scholar — the nation’s most prestigious scholarship in the natural sciences, mathematics and engineering, H-SC’s first physics major to receive the award.

Howerton has conducted independent student research in the physics department at H-SC hoping to find a connection between zinc and the pancreas, especially as they relate to the onset of diabetes. Last fall, he completed a project using gamma-ray spectroscopy to identify and quantify sources of environmental radioactivity on campus.

“I am honored and humbled to be named a finalist for this incredible award and to be placed among so many outstanding scholar-athletes who have earned this distinction,” Howerton said, referencing the Campbell Trophy. “I thank my coaches, professors, family, friends and other mentors for supporting and guiding me throughout the years, and I thank the National Football Foundation for selecting me.

“Most of all, though, I am grateful for Hampden-Sydney College, which has given me unique opportunities not just to compete in football but to excel in meaningful classes and to take leadership roles in countless organizations about which I am passionate.”

Howerton has served in numerous leadership roles within the campus community as well, most notably on the Appeals Committee at the college during 2020-21, responsible for reviewing Honor Court and Code of Conduct cases appealed by students, as well as being a member of the Student-Athlete Mentors organization and serving as President of the Tiger Athletic Club last year.

“What distinguishes Tyler from the pack is his phenomenal work ethic,” 21st-year H-SC Football Head Coach Marty Favret said. “Whether it’s preparing for a football game or a thesis on nuclear physics, he outworks everyone. He epitomizes the consummate scholar-athlete.”

In addition, Tyler is involved with the H-SC Mentoring Program this year — pairing him with a student at Prince Edward County Elementary School to tutor and guide toward a successful life — meeting with the student each week either virtually or in-person to hopefully have a major positive impact on the student’s life.

He has also been volunteering this semester at the Farmville Area Community Emergency Services (FACES) Food Pantry.

Tyler is the son of John and Nancy Howerton, of Alexandria. He started all 10 games on the offensive line at either center or right guard during 2019.

The 2020 team captain has started every game — 29 — since his arrival at H-SC, is a three-time ODAC All-Academic Team honoree and was a Third Team All-ODAC selection in 2017. He holds the football program’s all-time squat record — 700 pounds — and boasts the program’s second-highest bench press — 450 pounds.

Submitted by their schools, which are limited to one nominee each, candidates for the Campbell Trophy must be a senior or graduate student in their final year of playing eligibility, have a GPA of at least 3.2 on a 4.0 scale, have outstanding football ability as a first-team player or be a significant contributor and have demonstrated strong leadership and citizenship.