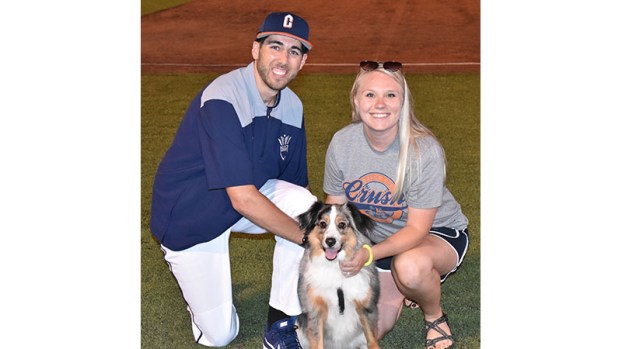 Randolph-Henry High School Varsity Baseball Head Coach Josh Barmoy, left, and his wife, Chrissy Barmoy, pose for a photo with their dog, Griffey, on the field at U.S. Ballpark in Ozark, Missouri, after “Bark at the Park” night earlier this year. The Barmoys spent part of their summer in Missouri for what proved to be a time of growth for both of them. Josh coached a team sponsored by the Fellowship of Christian Athletes in a collegiate baseball league. (Photo by Nikki Pentecost) 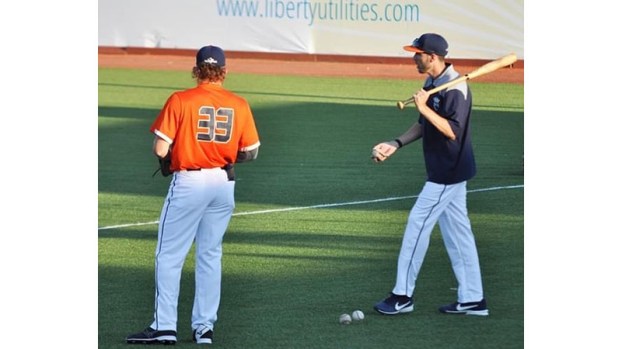 Randolph-Henry High School Varsity Baseball Head Coach Josh Barmoy had the opportunity to serve as baseball coach of a team in the Show-Me Collegiate League based this summer in Missouri. The experience ended up being one of tremendous growth on multiple levels for Barmoy and his wife, Chrissy, who accompanied him.

The league drew college players — rising freshmen to rising seniors — from all over the country who came due to their potential to succeed as professional baseball players.

Barmoy coached the Queen City Crush to an 8-6 overall record.

“We were the only team that didn’t have a Division I player on the roster,” he said. “We played against guys from Missouri State, from the University of Missouri, so Mizzou, and there was a guy who was there at one point from Vanderbilt, Will Duff.”

The Crush also played in an out-of-league game that pitted them against a team featuring the designated hitter from the University of Arkansas.

“And if they would have counted that out-of-league game for us, we’d have been 9-6, and that would have put us in second place,” Barmoy said.

Queen City ended up placing fourth out of seven teams in the league when the COVID-19 pandemic brought the season to an early end for all involved.

“I thought we had a really good chance at making a run for that first or second seed, but it still was a great summer,” Barmoy said.

The Crush may not have had a Division I player, but they did end up with the league’s Pitcher of the Year — Ryan Carmack, who goes to Southwest Baptist University in Bolivar, Missouri.

But for Barmoy and many of his players, what happened on the diamond was simply one part of their experience during the Missouri collegiate league’s run.

“The experience out there, it was more than just baseball,” Barmoy said. “It was an opportunity for myself and for my wife to really just kind of grow in our faith as well.”

The Queen City Crush were a team sponsored by the Fellowship of Christian Athletes (FCA).

“Guys don’t have to believe in Jesus Christ to be on the team, they just have to kind of agree to do some team things that we do,” Barmoy said.

The Crush went to church on Sundays and had team Bible studies on Mondays and Thursdays.

“We had a real treat to actually have the chaplain from the Springfield Cardinals, the AAA affiliate of the St. Louis Cardinals — he actually did a Bible study for our guys while we were there,” Barmoy said.

The squad also helped out with a T-ball league.

“It was called Monday Night Minis,” Barmoy said. “And so our guys would come and we would set up a field. We played on an all-turf field, so we had some temporary fences and different things like that, and we set up about six or seven fields, and our guys actually would coach the T-ball team and help with practicing and different things on Monday nights, which was really cool to see our guys interact with those kids and just show their heart and just know that they’re here for more than just baseball.”

The Crush also had plans for community service outreach. They helped with a 7-on-7 football tournament, where one member of the baseball team was able to share his Christian testimony.

The pandemic halted the league and team activities before the Queen City squad was able to help out at a food pantry.

Nevertheless, Barmoy indicated the benefit for all involved, particularly himself, was significant. He said he worked on his relationship skills with new people, since he knew none of his players beforehand.

He highlighted the positives he and his wife experienced courtesy of the team’s general manager, Cody Pentecost, and his wife. Barmoy described Pentecost as an outstanding man and a great leader.

“He runs the FCA in Springfield and kind of took me under his wing and was able to kind of pour into me,” Barmoy said. “And then his wife, actually, and my wife were really good friends, and they were able to kind of meet together and kind of talk about the role of a coach’s wife. And that’s a tough role to really ask our wives to (play) during the season, just all the time that we’re away and different things like that.

“So I think that both of us kind of grew in a sense of better perspective of why we’re here,” he added.

Barmoy recalled a highly significant moment for the Crush early in the summer. They had been together as a team for only two days when he took them to a ropes course for a team-building experience.

During that event, players had an opportunity to talk with each other and their coaches, as everyone was just getting to know each other.

“(The players) just opened up about everything that’s going on in their lives,” Barmoy said. “And from that moment on, it was like our team just clicked. It was just a bonding (moment), because everybody shared their story of where they’re from and kind of their vision and just what they’re struggling with.”

Barmoy said back in Charlotte County, he hopes to create opportunities for members of the Randolph-Henry baseball program to have similar moments in which they can connect with their teammates and be able to share their own stories.

During the summer, he was specifically encouraged to overhear conversations about spiritual matters between Crush players while driving them to an away game.

“To hear guys just choosing to talk about different things that’s going on in their faith and just talking about different biblical truths and stuff like that was just kind of refreshing, because that’s just something you don’t normally hear from teenagers,” he said.

He noted this time of COVID-19 has been almost perfect as far as learning patience and just being able to get a new perspective on baseball and the impact that coaches can have on student-athletes.

“I’m looking to bring everything that I learned to Randolph-Henry and really pour into our guys and build stronger relationships with them and help them in any way possible, whether that’s spiritual or just helping them with their skills, helping them get into college, making them a better person,” he said. “I think that’s kind of (what) I want our program to be known for is just creating really good men that come out of our program.”