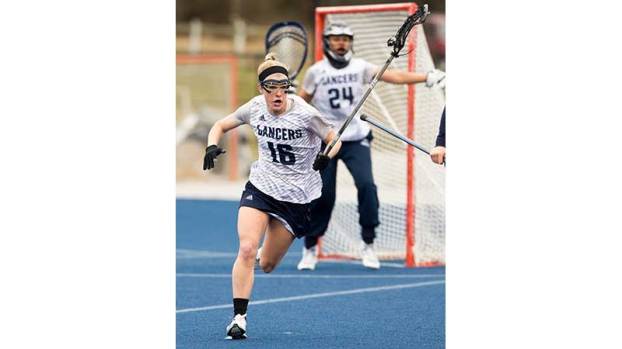 Former Longwood University lacrosse standout Shiloh McKenzie was honored for her sustained excellence in the backfield by being named to the Big South Conference All-Decade Team. (Photo by Mike Kropf)

From Longwood University lacrosse’s first game as a member of the Big South Conference, Shiloh McKenzie was a force in the Lancer backfield.

Now the former Longwood standout and 2016 Big South Co-Defensive Player of the Year will go down in league history as a member of the Big South All-Decade Team.

A native of Lothian, Maryland, McKenzie was at Longwood from 2013-16, the four years which coincided with the lacrosse program’s first four seasons as a member of the Big South. It was also in 2013 that women’s lacrosse first became a Big South Conference sport.

McKenzie wasted little time in asserting herself as one of the best in the league, earning the first of her three consecutive All-Big South selections as a sophomore and going on to receive back-to-back first-team citations as a junior and senior.

She was one of 16 players named to the Big South All-Decade Team and earned the honor alongside Longwood Assistant Coach Jenna Kasmarik, a former Winthrop University standout who was named Big South Offensive Player of the Year in 2015 and still holds the league record with 3.82 goals per game.

McKenzie was a three-year starter who played in more than 70 games and started more than 50 in the blue and white. Her career crescendoed in 2016 when she was named Big South Co-Defensive Player of the Year and a Mid-Major Lacrosse Mid-Major All-American.

For her career, McKenzie amassed 32 goals, seven assists, 39 points, 105 ground balls, 72 caused turnovers and 117 draw controls in 71 games, setting career-highs in every one of those categories as a senior.

Those contributions not only landed McKenzie among Longwood’s all-time top five in career draw controls and caused turnovers, they helped the Lancers to a pair of top-three finishes in the Big South standings and a four-year league win-loss record of 18-11. Longwood finished at least even in conference play all four years, including back-to-back 5-2 records in 2013 and 2014.

McKenzie was the fourth Lancer named to one of the Big South All-Decade Teams for 2010-19, joining women’s soccer standouts Amanda Spencer and Sydney Wallace and men’s tennis ace Amadeo Blasco. Each of those teams were selected by a 15-member committee made up of Big South administrators and league representatives and a fan vote that comprised 20% of the final tally.

No track championships at SBS

South Boston Speedway officials remain optimistic there will be some racing at “America’s Hometown Track” in 2020, but due to... read more