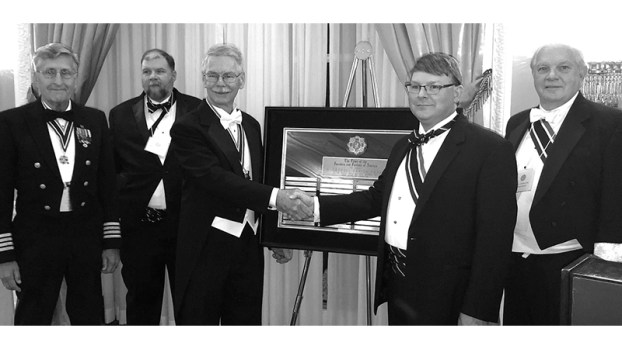 The General Order of the Founders and Patriots of America (OFPA) honored J. Shane Newcombe during the 124th General Court in White Sulphur Springs, West Virginia at the historic Greenbrier Resort from Wednesday, June 10 to Friday, June 12.

Newcombe, a native of Randolph and director of Abroad Home Furnishings, a wholesale furniture and home accessories manufacturing company based in Virginia, and High Point, North Carolina represented the Virginia Society OFPA to the 124th General Court.  Newcombe is the current governor of the Virginia Society as well as serving as the National Order’s Treasurer General. Newcombe is a direct-lineal descendant of James Allen, a founding ancestor who arrived in Jamestown in 1608 and Captain Richard Allen of the Cumberland Militia during the Revolutionary War.

During the 124th General Court’s annual awards presentation, Treasurer General Newcombe was bestowed with the Parish Award, the order’s most prestigious award, which is presented to constituent societies for being the most active, having the highest number of new associate recruits, retaining its roster of associates, holding numerous programs and presentations throughout the calendar year, and commemorating the cause of liberty through memorializing our nation’s founders and patriots by means of wreath laying ceremonies, religious services, and educational programs.

This marks the 12th consecutive year in which the Virginia Society of the Order of the Founders and Patriots of America has been awarded the Parrish Award.

The Virginia Farm Bureau board of directors has announced the decision to cancel the 2020 State Fair of Virginia, and... read more