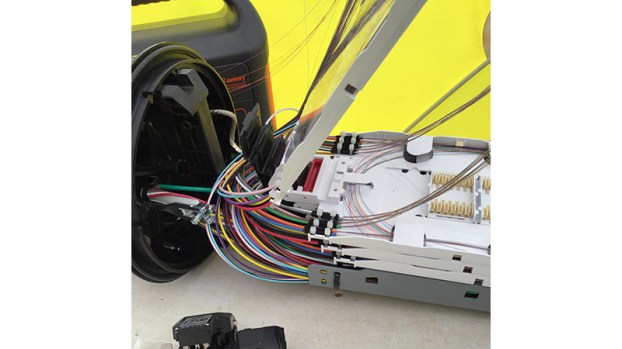 This photo provides a look at what the fiber looks like while it is getting spliced. This fiber allows high-speed internet access that a proposed bill could notably expand for people in rural areas. (Photo courtesy of Firefly Fiber Broadband)

U.S. Sen. Mark Warner, a Democrat from Virginia, announced a $100 billion piece of legislation Thursday, July 9, that could significantly expand broadband in the area.

“The Accessible, Affordable Internet for All Act would invest $100 billion to build high-speed broadband infrastructure in unserved and underserved communities, helping to bridge the digital divide that still exists in cities and towns all across the country,” he wrote in the emailed announcement titled “A Plan for Rural Broadband.”

“In addition to establishing broadband infrastructure nationwide, this bill would also put guidelines in place to make sure affordable internet service plans are made available by internet service providers,” he said. “It would also help provide discounts on internet service for low-income consumers and students and would establish grants to help expand digital inclusion at a local level.”

Charlotte County Administrator Daniel Witt said the county’s Board of Supervisors has identified affordable broadband as one of its primary goals for Charlotte County.

“If Sen. Warner’s initiative helps accomplish that goal, that’s a big plus for Charlotte County’s citizens,” he said.

Wylliesburg/Red Oak District Supervisor Kay Pierantoni said the county’s efforts to secure more coverage for Charlotte needs all the help it can get.

“I haven’t looked into Sen. Warner’s proposal but will be doing so,” she said. “Chandler Vaughan is an intern who is working on putting together all options/possibilities for the county.”

She noted the board has agreed to have a called meeting before the board’s August monthly meeting just to discuss options at this point and a plan of action.

“Administrator Witt is to contact all interested (internet service providers) to join us,” she said. “Date will be set soon.”

State Sen. Frank Ruff Jr., a Republican who represents Virginia’s 15th district, including all of Charlotte County, communicated optimism about the bill but was also quick to analyze the politics of the situation.

“If it passes and does what it says it’s going to do, it would have to help us,” he said. “But the devil is probably in the details when you talk about that much money. And then you start looking at the breakdown, it sounds like to me they’re buying a lot of bureaucracy in the middle of it.

“But other than that, I don’t know,” he continued. “I think it’s interesting that there are five or six co-sponsors, all are Democrats, and they have not reached out to get any Republican support for it. So, I don’t know whether it’s a political stunt or if it’s purely aspirational.”

He said he thinks people are starting to wonder where all the money is coming from.

“We spent a lot of money on the virus period and all that,” he said. “If (the bill is) going to be successful, my guess is going to be it’s over a several-year period.

“It wouldn’t be $100 billion split 50 ways or any other formula,” he continued. “It would be, probably, some over x number of years, which is probably safer than trying to throw out that much money at one time, because it would not get spent wisely. There’s only so much expertise in the field. If it’s the same people bidding against each other, then there won’t be any bidding.

The price will be high everywhere because everybody will get some part of the business, and they know they will, so they won’t try to be very frugal in their plans.”

Ruff said in his opinion, matching money is always the best way to go.

“So if you could get some federal money, some state money and some private money focused, you would be better off than to try to get all your funds from one source or another, because generally when they come from one source, there are strings attached that you have to jump through,” he said.

Gary Wood, who is president and CEO of Central Virginia Electric Cooperative and Firefly Fiber Broadband, offered a preliminary evaluation of the bill Warner is proposing.

“First of all, I applaud all efforts at the federal, state and local level of people who are trying to help solve the digital divide that we have in the rural areas,” he said. “So I think from that perspective, it’s a good bill.”

He noted he does not know the exact numbers for funding yet but said the bill certainly has a good bit of funding in it for rural broadband.

“I think the mechanisms they use, which are the state block grants and things, are efficient ways to do that,” he said. “I think our state does a good job, when it has funds, of having them distributed in areas that have the need for broadband expansion. So I think it has some good things.”

He said the bill specifically talks about cooperative organizations being eligible, noting this is good.

“I think it makes clear that they understand cooperatives are part of the solution in rural areas, and that’s become a pretty standard view of most folks at the federal and state levels,” he said. “But you just have to be careful about any of these bills. Language can be in it that can exclude certain technologies or types of organizations.”

Another positive he mentioned was that the bill has specific language that favors gigabit-speed solutions.

“I think if you look at having an approach that awards the very best solution we have today, you fix the problem for longer term than if you have a solution that is something you can get by with today, but it’s not leading-edge technology,” he said. “Then you’re going to go back and fund the same area again in a few years to upgrade it to catch it up again.”

He praised the timing the bill sets up.

“They have a number of places in the bill with some specific timelines, they have incentives to move quicker — all of those things are good,” he said. “The intent seems to be to really emphasize the first five years of time after the bill is passed to push forward with a lot of construction infrastructure, and that’s good. I think any money not spent within 10 years at the state level has to be returned, so they have a little longer timeline to allow for the fact that it’s going to be difficult to build out everywhere at one time.”

Wood was also pleased with how the bill aims to keep monthly payments for users.

“They’ve gotten some specific money set aside to help provide for low-or-moderate income households to ensure that it is affordable,” he said. “They’re doing some things on the provider side to publicize rates and encourage lower rates. And then on the user side, they’re providing some support for the families who need it to make sure that they can get a basic level of broadband with an allowance of up to $50 a month, which gets a basic service level that would provide really good speeds, particularly if it’s a system similar to the one that Firefly and Central Virginia Electric offers, where our basic service is 100 megabits per second at $49.99. “

Wood said the bill is well thought out, covering a lot of bases, both on the user side and on the construction and provider side.

“And it appears that it’s trying to limit the amount of administrative burden from getting the money and getting it into construction,” he said. “That can be another problem sometimes with federal programs is the bureaucracy and administrative overhead. But this language seems to look for ways to facilitate the money out and limiting the number of administrative hurdles to overcome.”

Cook described the bill as another good attempt to try to help find the solutions needed in order to get broadband to all Americans.

“So from that perspective, I’m excited that it’s out there, and I’m hopeful but a little bit wary of whether or not it’ll be passed,” he said.

Ruff said if the bill is a starting point, then it’s very possible that there will be some money put into it.

Like many other localities, Charlotte County is now faced with what they must do with a Confederate statue –  remove... read more