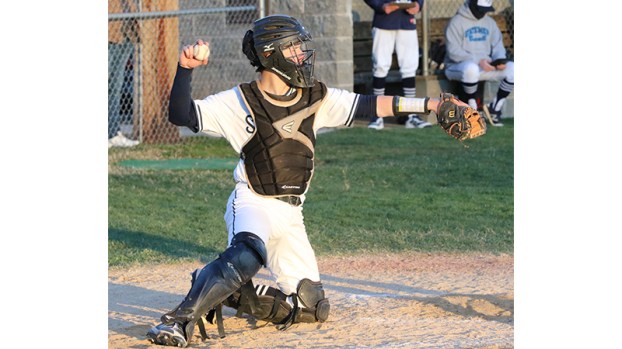 Randolph-Henry High School catcher Matthew Harding competes during his junior season in 2019. He was set to return as a catcher this season for the Statesmen before the novel coronavirus intervened. He is expected to compete for playing time at catcher in college at Eastern Mennonite University. (Photo by Titus Mohler)

Randolph-Henry High School’s Matthew Harding had already signed on the dotted line in November 2019 to play baseball at the next level. His last major step before joining the Eastern Mennonite University program in Harrisonburg was to play his senior season with the Statesmen this spring.

However, the COVID-19 pandemic prevented that last major step.

Harding was, of course, not at school this spring in Charlotte Court House, and he and his teammates on the Randolph-Henry varsity baseball squad were not able to play a single game of the 2020 regular season.

“It was very hard, especially in the beginning, getting used to, ‘This is my lifestyle now, and I just have to push forward and continue to get better even though I’m not where I want to be,’ which was at school, living my senior year, making all the memories and playing my last year of high school baseball,” Harding said. “So I just had to use it as motivation to be better, and if this does happen again, I’ll be prepared.”

Statesmen Head Coach Josh Barmoy noted Harding was a three-year starter on the varsity team, including 2020. He played on the junior varsity team as a freshman.

“He got called up as a sophomore,” the coach said. “He’s a real good guy as far as knowing the game — one of the most intelligent guys that I’ve coached, just understanding the game, the strategy and just the back and forth, the joy. He just loves baseball. It’s really been a pleasure to coach him and his brother.”

Barmoy had a couple of distinct memories of Matthew Harding that help to inform his lasting impression of his senior catcher.

The first memory was from Harding’s sophomore year. Barmoy said he and some coaches were in a room, letting student-athletes know one-by-one whether or not they had made the team and why. He remembered they broke the good news to Harding that he would be making the leap to varsity.

“He was so excited, I think he kind of ran out of the room and then forgot to ask a few questions, because two seconds later, he calls me on the phone, and he said, ‘I’m so excited to be a part of the varsity team (that) I forgot — I’ve got a couple questions,’” Barmoy said with a laugh.

As a sophomore, Harding played at first base and some at catcher.

As a junior, he played catcher until halfway through the season when he was dealing with arm injuries that required a season-ending surgery.

Barmoy said Harding was supposed to have his surgery on a Tuesday, which is usually a game day for Randolph-Henry. Harding came to speak to his coach the day prior.

“‘Coach,’ he said, ‘I’m going to have my surgery on Tuesday, and then whenever I’m done with my surgery, I’m going to be at the game,’” Barmoy recalled with another chuckle. “And I’m like, ‘OK, man. If you want to, that’s fine, but I understand. You don’t need to.’ He’s like, ‘No, Coach. I’m going to be there.’ And so he never missed a practice, never missed a game. And so that’s just Matthew — loves the game, wants to be around the guys.”

To wit, when asked what he missed most about the lost 2020 season, Harding said probably just being with his team.

“Some of these guys, I’m not going to see again for only Lord knows how long,” he said. “There are some guys that on the last day that we had school and that last (scrimmage) that we had, I haven’t seen them since, in person, since school let out, so who knows how long it’ll be.”

‘Crazy it got taken away’

Carson Gibbs will compete on the diamond at the college level, but his high school baseball career will always feel... read more