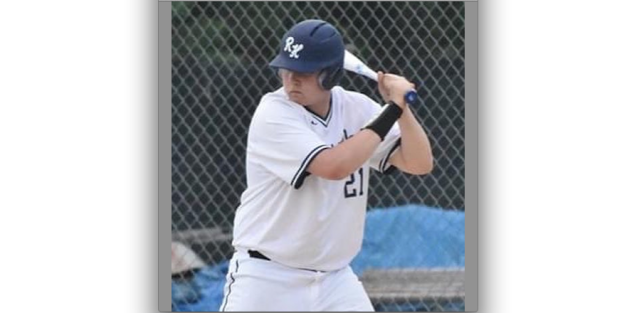 Randolph-Henry High School’s Winfield Layne earned the respect of his head coach in a variety of ways, and he eventually commanded the respect of opposing coaches in the district. They voted him to the all-district first team as a designated hitter last season.

‘Everybody needs a Winfield on their team’

Winfield Layne made the most of the opportunity he was given with the Randolph-Henry High School varsity baseball team, and he set an outstanding example for others to follow.

“Winfield was a great guy that always had your back,” Statesmen Head Coach Josh Barmoy said. “A real teammate, a guy that you never had to worry about as far as where his head was, where his heart was, and I think that’s a rare commodity these days — a very selfless guy who really wanted to do whatever for the team.”

Layne made that desire clear to Barmoy in word and deed.

“He said, ‘Hey, Coach, if I don’t play but everybody else is better than me and that gives us the best chance to win, then that’s what I’ll do, and I’ll support the team in other ways,’” Barmoy said. “Those are the things that you don’t see a lot of these days. I’m just really happy that he was able to be a part of our program, not only for him getting better as a person, but I think it made others appreciate their time on the field.”

After playing his freshman and sophomore seasons on the Randolph-Henry junior varsity squad, Layne moved up to varsity as a junior. He was not a starter, though, and saw very limited time on the diamond at the beginning of the year.

“But he continued to work, continued to battle and did whatever he could to get better as a person,” Barmoy said. “And we had a few kind of lapses in some other guys’ performance, which just gave him an opportunity. And about midway through the end of the year, he just kind of came alive.”

Layne said that on the field, his contribution to the team’s success was his bat.

“I was hitting the ball pretty good last year,” he said.

He eventually gained the attention of coaches throughout the James River District, who named him to the all-district first team as a designated hitter.

“And so that was awesome to have a guy that didn’t really play a whole lot at the beginning of the year and then took hold of his opportunity and really shined towards the end of the year,” Barmoy said.

The coach said Layne would have been a role player this year who possibly could have earned a hitter’s spot permanently or have been a pinch hitter.

“But he’s a guy, again, that works extremely hard, even staying after practice, hitting off the tee,” Barmoy said. “While everybody else is leaving, he’s still out there — that’s the kind of person he is. He’s going to give it 110% in everything he does.”

Layne indicated that like his on-field performance, how he behaved off the field with the team was intentional.

“I don’t know if my teammates took it this way, but I was trying to set a good example by working hard all the time, trying to keep a positive attitude and that’s the biggest thing, always rooting on your teammates, that sort of thing,” he said.

Barmoy said Layne was always the loudest one in the dugout, regardless of whether or not he was playing.

“Everybody needs a Winfield on their team, everybody does, a guy that’s going to do whatever it takes to help the team win,” the coach said. “And I have a lot of respect for him.”

Layne has been one of the leaders in the Statesmen Fellowship of Christian Athletes group for four years, Barmoy said.

“He’s been one of the guys that’s really kept it going, leads meetings, encourages guys to get involved,” the coach said. “So again, I can’t say enough good things about Winfield, and I’m just really happy with the opportunity I’ve had to be able to be a part of his life and to learn from him and just to grow as a coach.”

“That’s awesome to have a valedictorian in your program, and he’s a guy that’s been there for four years,” the coach said.

Layne said his key to managing the workload of school, like classes, studying and homework, and baseball responsibilities, like practices and scrimmages and games, was knowing that both are as important as each other.

“It’s equally as important to work on your studies as it is on baseball, because if you can’t keep up with the success you have in the classroom, you can’t play baseball or you can’t do anything athletic,” he said.

The COVID-19 pandemic prevented Layne and his teammates from playing any games in the 2020 campaign, and he shared what he was missing most about the season.

“Definitely joking around with my friends on the diamond; competition, being competitive; and seeing your hard work pay off is a big thing,” he said. “We put in a lot of hard work at practice and during our scrimmages and stuff, and we just never got to see any of that come to fruition this year.”

He said not being on the ballfield with his teammates this spring or even being at school was really tough, especially as a senior.

“Our last three-and-a-half years of high school all built to this,” he said. “Our last semester, really our last nine weeks is what we missed. Getting to see our friends for the last time, getting to wear the Statesmen uniform again — all of that we missed out on. And so it was tough, but not a whole lot you can do about it, I guess.”

Layne will be attending Virginia Tech next and majoring in engineering.

“I might try to see if I can play some sort of intramural or club ball at Tech, but beyond that, I probably won’t do a whole lot more baseball,” he said.

But the example he set in Randolph-Henry’s program will do a lot for years to come, setting a high standard for others to carry forward.

Newcomb rises to the challenge

If the COVID-19 pandemic had not prevented Randolph-Henry High School’s varsity baseball team from having a 2020 season, the squad... read more