The 17-year cicadas are back 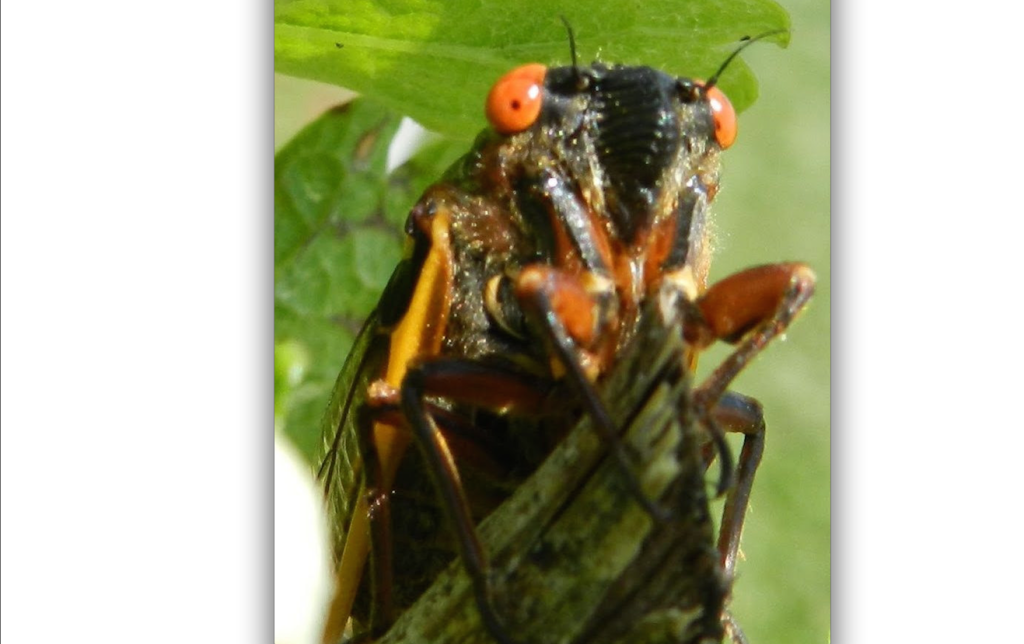 With warm daytime weather and mild nights here, a cacophonous whining like a field of out-of-tune car radios may be heard through open windows.

That can only mean one thing, the cicadas are back.

This year, that alien-like wail of the insect world will be even more pronounced, as millions of cicadas from brood IX emerge after 17 years underground.

“Communities and farms with large numbers of cicadas emerging at once may have a substantial noise issue,” predicts Eric Day, Virginia Cooperative Extension entomologist in Virginia Tech’s Department of Entomology in the College of Agriculture and Life Sciences. “Hopefully, any annoyance at the disturbance is tempered by just how infrequent — and amazing — this event is.”

The scale of these emergence events is astounding, with as many as 1.5 million cicadas emerging per acre.

Each periodical cicada brood covers a specific geographical region, with some areas overlapping. This year brood IX spans Southwest Virginia, parts of North Carolina, and West Virginia. People who live in these regions will experience a unique natural phenomenon that has not occurred in most of the area since 2003-04 (some of the region overlaps with Brood II, which emerged in 2013).

Cicadas — large, clear-winged insects with bulbous eyes — occur either annually (every year) or periodically (every 13 or 17 years) depending on the species.

Periodical cicadas spend most of their lives as immatures, called nymphs, living in the soil and feeding on tree roots. The iconic brown husks of the cicada, which can be found on trees and structures, are left behind as the nymphs construct mud tubes to crawl out of the soil toward a high place to molt for the last time. The transition from soil dwelling nymphs to mature adults is synchronized based on the year and temperature of the soil, allowing for all of a brood to emerge together to breed and lay eggs.

The timing of a 13- or 17-year cycle is one of the great mysteries of the insect world. Research and mathematical modeling suggest that the length of these brood cycles could be attributed to predatory avoidance.

When the cicadas emerge, the amount of biomass they provide could serve as a food source for potential predators to take advantage of. It is theorized that these cicadas have evolved to avoid synching up with predator cycles by having a 13- or 17-year prime number emergence interval.

The periodic nature and synchronous emergence of these broods facilitates the mating and egg-laying habits of the insect. The noise we hear is the mating call of the males who are attempting to attract females. For most people, the droning song of the cicada is nothing more than a slight annoyance, or fascination, especially with these large broods which only appear roughly once every two decades. For ornamental tree growers, and orchard and vineyard managers, this sound signals potential danger to their juvenile trees, vines, and saplings.

“Cicadas can occur in overwhelming numbers and growers in predicted areas of activity should be watchful” Doug Pfeiffer, a professor and Extension specialist in the Department of Entomology, said.

Cicadas do not pose a danger to these plants through feeding, but instead through their egg-laying habits.

Cicada females select pencil-width branches or vines, then implant their eggs into them using a sharp egg laying tube called an ovipositor. The nymphs then hatch from the eggs and drop down to burrow into the soil where they begin harmlessly feeding on the plants’ roots. The egg implantation causes the branch or vine to split and wither, a phenomenon known as “flagging” where a group of leaves on an otherwise healthy part of the plant turn brown and die. For a small tree or young vine, too many flagging sections can stunt their growth or even kill them outright.

Fortunately, the timeline for mitigating the impact of cicada egg laying is very short, as broods tend to have four-to-six weeks of activity before the generation dies off. Many entomologists suggest that tree growers avoid planting new trees in the year or two before large periodical cicada emergences in their area. While potential treatment options exist, from netting to sprays, few of these have a lasting effect on cicada egg laying.

The most effective method for reducing the potential economic damage these insects can cause would be for growers to plan ahead for their emergence.

Even if you are not a fruit tree grower or vineyard manager, it is likely you will experience some sign of these cicadas. You may hear them, find their cast skins on trees, or even see them congregating.

While large, cicadas do not bite, and are largely harmless, even to cats and dogs. This emergence, as well as the emergence of Brood X next year, are natural occurring events entomologists have been looking forward to for years.

“This insect is really fascinating, and if you don’t have fruit trees or grapevines to protect, you can enjoy this phenomenon while it lasts,” suggests Pfeiffer.

Additionally, Pfeiffer runs a Virginia Fruit Insect Updates blog with all the latest on cicadas in our area.