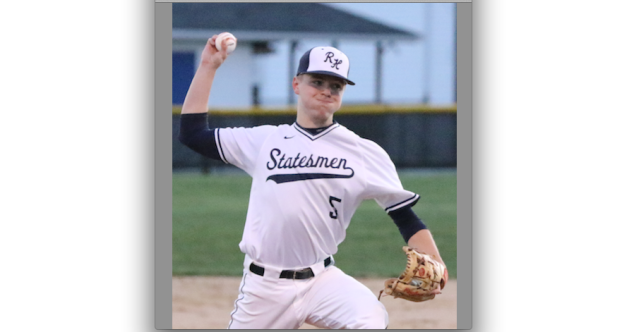 Randolph-Henry High School standout Colby Jordan will be aiding Chowan University with his abilities on the mound after signing to play for the Hawks.

Jordan to play ball for Chowan

It was April 22 when Jordan signed with the NCAA Division II Chowan Hawks, who reached out to him after his junior season, his first on the Randolph-Henry varsity squad.

And for Tracy Jordan, witnessing her son sign on the dotted line was a special moment.

“It was amazing, because it’s something that he’s wanted to do for years,” she said. “He’s dreamed about it, he’s looked forward to it, he’s worked really hard to get it with playing and practicing and putting in all of the time. It was just really exciting to be able to see him achieve what he’d been working for.”

Jordan said playing college baseball has been a goal of his since he was 10 years old.

He grew up in Drakes Branch and has played Dixie Youth Baseball in the county and travel ball for RISE out of Richmond in addition to playing for Randolph-Henry.

His decision of where to go at the next level was between Chowan and Ferrum College. What made Chowan his choice was related to both educational structure and the baseball program.

“They had smaller class sizes and were closer as a team,” he said.

He looks to major in exercise science with a goal of doing something in the realm of physical therapy.

On the diamond, he expects to be a middle reliever during his freshman year.

Statesmen Head Coach Josh Barmoy played at Chowan, which he said gives him some inside information on the Hawks’ program.

“Having a guy that can throw strikes and that’s a reliable guy is somebody that they can use right away in various situations,” Barmoy said.

He noted Jordan knows how to pitch and that while he is not going to light up the radar gun with his speed, he has never relied on just pure fastballs to perform well.

“He knows how to throw a curveball, his changeup, his fastball — he can throw them in any count and locate them extremely well,” Barmoy said. “So he’s a guy that has a lot of confidence, and as a coach, I have a lot of confidence in him to put him in, in any situation, because I know he’s going to throw strikes. He’s not going to walk a lot of people. He’s going to be able to pound the strike zone and allow the defense to make some plays behind him and be very effective.”

Jordan offered thanks to all of his coaches — but especially Barmoy — for helping him reach the college level. Barmoy coached Jordan at both the junior varsity and varsity levels at Randolph-Henry.

Ray Conner Ray Conner is living his dream as he takes on the role of Randolph-Henry High School’s head football... read more