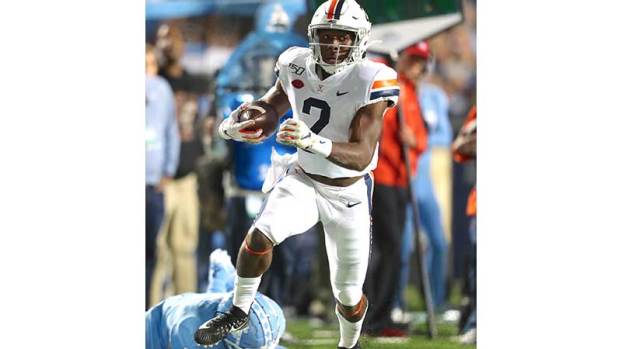 Former Randolph-Henry High School multi-sport star Joe Reed became a professional football player Saturday, April 25, when the Los Angeles Chargers selected him in the fifth round of the 2020 NFL Draft.

The Chargers used the fifth pick of the fifth round and the 151st pick overall in the seven-round draft.

Reed, who graduated from Randolph-Henry in 2016, completed a successful college football career at the NCAA Division I-level as a kick returner and wide receiver for the University of Virginia (U.Va.) in 2019.

The Cavaliers reported Saturday that Reed was the first wide receiver drafted out of U.Va. since 2006, when Marques Hagans was taken by the then-St. Louis Rams in the fifth round. 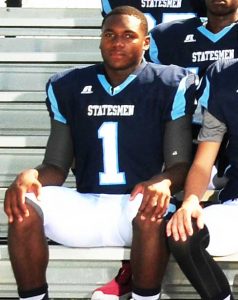 Joe Reed’s football career has taken him from the Randolph-Henry High School Statesmen, as pictured above in 2015, to the University of Virginia Cavaliers and then, as of Saturday, April 25, to the Los Angeles Chargers in the NFL.

In his high school football career, Reed rushed for more than 2,200 yards, passed for 900 yards and scored more than 30 touchdowns. In a major highlight that came during his senior season with the Statesmen in 2015, he rushed for 392 yards in a single game.

Reed won the Jet Award in 2019 as the nation’s top kick returner after leading the nation with a 33.2-yard kick return average, officials highlighted in the release. He earned first-team All-America honors from the Walter Camp Foundation and the Football Writers Association of America as a kick returner. Reed was also a finalist for the Paul Hornung Award as the nation’s most versatile player. He also earned membership to the National Football Foundation’s Hampshire Society.

The versatile Reed recorded 77 receptions and 679 receiving yards to go with seven touchdowns in 2019.

The Chargers finished 26th in kick return average last year in a season where they finished in last place of the AFC West with a 5-11 record. The Chargers start the new season with a new stadium. SoFi Stadium will open in July and will be home for both the Chargers and Los Angeles Rams.

See the April 29 edition of The Gazette for more coverage of Reed’s selection.

While Virginia High School League (VHSL) spring sports and activities were canceled for the 2019-20 school year, there is still... read more