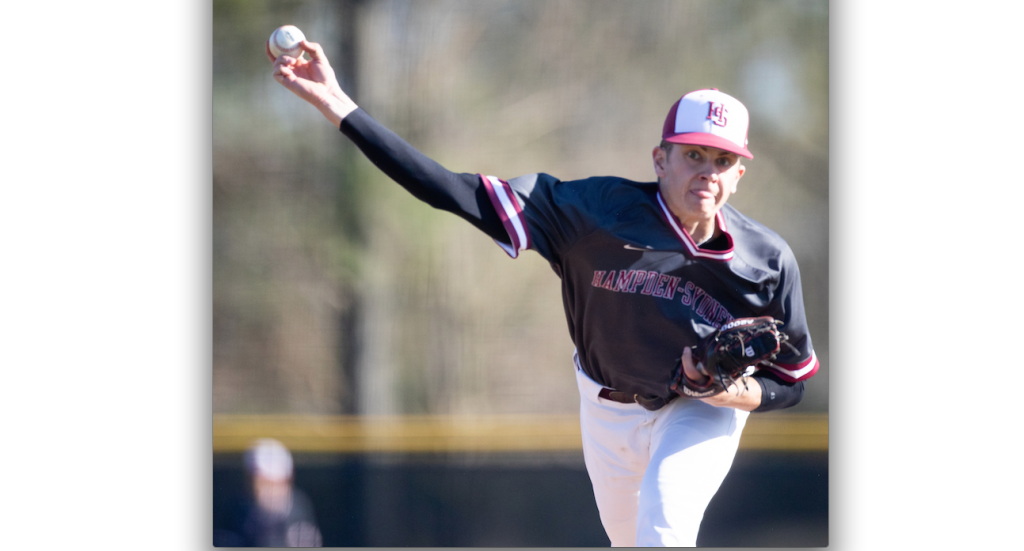 Former Randolph-Henry High School standout Bradford Webb was key to the outstanding success of Hampden-Sydney College’s 2020 baseball team. As a closer in the bullpen, the Tigers senior earned three saves in the team’s abbreviated run.

The seasons of many 2020 spring sports squads were cut short by the COVID-19 pandemic, but the cancellation was particularly hard to bear for Hampden-Sydney College’s (H-SC) talented baseball team.

Through 16 games, the Tigers were outstanding. They went 12-4 overall, including a 2-0 start in the Old Dominion Athletic Conference. Among their wins was a 15-7 road victory over Christopher Newport University, which was ranked No. 25 in the nation at the NCAA Division III level.

“We were feeling really good,” Hampden-Sydney Head Coach Jeff Kinne said. “There were teams that we beat that were getting votes for top 25, and I don’t know why we weren’t getting any love, but we felt really good about the team we had and felt that we were a tough team to beat.”

The coach said he really felt the Tigers could have been a nationally ranked team this season.

“I really felt like we should have been,” he said.

This year, Kinne and his coaching staff were having a problem every group of coaches would love to deal with — they were finding it hard to decide on a lineup because so many of their players were doing well.

In the second half of a doubleheader Feb. 29, H-SC was taking on Ithaca College, which Kinne said was a preseason top-25 team. Due to injuries, the Tigers were without the first three batters in their lineup — senior Jacob Bartlett, senior Andrew Kasiski and junior Ryan Clawson.

Kinne noted the three freshmen he and his staff put in to replace those batters ended up going 7-for-13 with five RBIs, and Hampden-Sydney won 9-4.

It was a powerful testament to the depth of the Tigers’ roster this season.

“We could have gone 12 deep easily and felt good about it,” Kinne said.

Leading H-SC’s team was an outstanding group of seniors.

“We relied heavily on all nine of them, and it’s a really good class, and they’re finally healthy and together,” Kinne said. “We had seniors in six spots on offense, I want to say. Our catcher, short(stop), second, two outfielders and our (designated hitter) and then two of our four starting pitchers were seniors.”

The Tigers had won nine of their last 10 games and were looking forward to continuing the run when the conclusion to their season came suddenly.

“The end was surreal,” Kinne said. “It was like being in a movie.”

The final days of the campaign came amid Hampden-Sydney’s spring break, during which the Tigers played multiple games. Kinne described what those days were like.

“We beat Piedmont (College) on Wednesday afternoon, (March 11,) and they finished getting voted for top 25, and we just drummed them, (9-0,) and their coach, after the game, texted me,” Kinne said. “He said, ‘You guys are the best team we played, and you guys are great.’ And then on the bus ride home, it unraveled from there. The NBA took the Jazz off the court, and they suspended the season, and just every time we hit refresh on Twitter, something else happened.”

He noted the team arrived back at H-SC around 1:30 a.m. Thursday, March 12, and a plan was set in place — the players would have some time off.

He highlighted the difficulty of the season ending in this way.

“It was over because of a virus, not because somebody struck out to end the season,” he said. “It’s tough.”

The season being cut short impacted not only the ability of the team to make its full contribution to the school’s legacy but also individuals, like the Tigers’ top pitcher, senior Chase Mayberry.

“He was our No. 1 for four years, and he was killing it,” Kinne said. “Unfortunately, when the season got shut down, he’s 11 strikeouts away from the school record.”

In five appearances this season, Mayberry went 3-0, with a 1.20 earned-run average (ERA) and 38 strikeouts thrown, giving him 194 for his career at Hampden-Sydney. Jon Waite holds the school record with 204, and John Schoenholtz is second with 196.

“That was a hard one to know that he potentially needed one more game, two at most, and he was that close,” Kinne said.

Senior Jonathan Triesler also starred as a starting pitcher in addition to being a standout shortstop. In four appearances on the mound this year, he went 2-0, with a 3.96 ERA and 23 strikeouts.

The coach also highlighted sophomore Trenton Tiller, who, in four appearances, went 3-1, with a 1.93 ERA and 21 strikeouts.

Kinne said all aspects of the Tigers’ game were quite good this year, but what he thought accounted for the significant improvement over last year’s 17-19-2 squad was pitching and pitching depth.

“We moved Bradford Webb to the bullpen and a guy named Cam Meyers — they had really come into their own, both of them,” the coach said of the two seniors. “Last year we had to start Bradford, which was not a good situation for him, but it was more of a need thing than anything else. But with Bradford closing and Cam setting up, we really felt like if we could get deep into games that we had a good shot to win.”

Webb, a former standout at Randolph-Henry High School in Charlotte County, had three saves this season.

“Andrew Kasiski was hitting close to .500,” Kinne said. “He was doing it with a broken hand.”

The coach noted the senior broke his hand in a Feb. 29 game, sat for a couple contests and then came back as a designated hitter.

“He was having an unbelievable season offensively,” Kinne said. “Everything he did (hit) fell.”

“We really felt like, top to bottom, all nine guys in our lineup were tough outs,” Kinne said.

The coach said he will remember the 2020 Tigers in a lot of different ways.

“But unfortunately, the thing I’m going to remember is that we weren’t all together when it ended.”

Kinne struggled to maintain his composure as he grieved, having allowed half the team to go home March 12, never imagining the season would end while they were away.

“Sorry, it’s hard,” he said holding back tears. “It hurts bad not to have the team together when it ended like that. I don’t know if ‘regret’ is the right word, but that’ll be one of my biggest regrets in coaching. Wins and losses, whatever, but that one, that hurts, hurts a lot.”

The departure of the nine seniors will leave a lot of big shoes to fill for the 2021 Tigers.