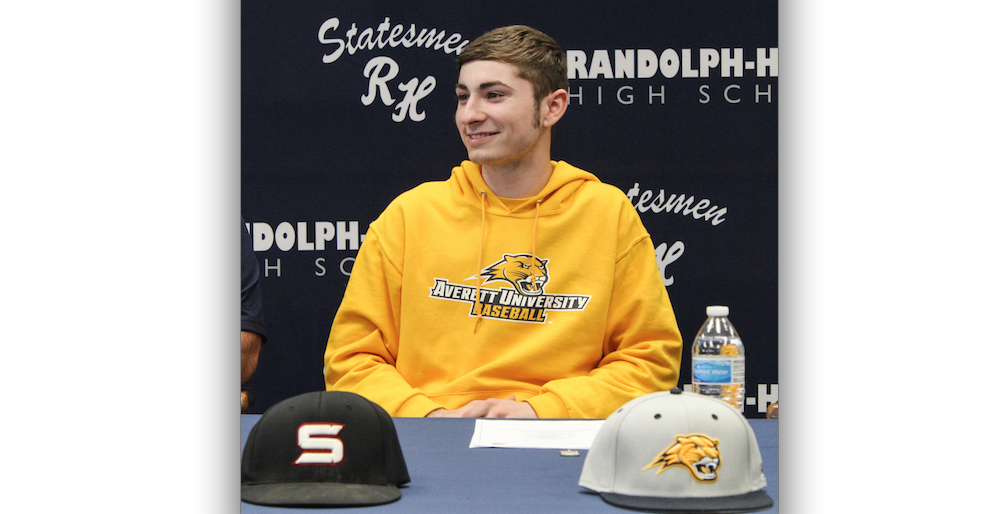 Randolph-Henry High School senior baseball standout Carson Gibbs will compete on the diamond at the college level for the Averett University Cougars.

Gibbs publicly announced his commitment to Averett with a March 3 signing ceremony at Randolph-Henry that drew his family, teammates, friends and many of his former coaches.

He noted he was probably 5 or 6 years old when he got his start in baseball, first playing T-ball. Then he progressed through the levels of Dixie Youth Baseball.

His mother, Alison Gibbs, estimated he began playing travel ball when he was about 12.

“Around 12 years old is when I really started thinking about college,” Carson Gibbs said.

When the time came to make a decision on his college destination, he chose Averett out of a list of other possibilities that included Emory & Henry College, Mary Baldwin University, Ferrum College and Randolph-Macon College.

“I just felt like all the people at Averett were much more nice and caring, and I just like the setting that was at Averett,” he said.

The March 3 signing ceremony was a special moment for Gibbs because of all that it represented about taking that step to the next level.

“It was unbelievable,” he said. “It’s been what I worked for my whole life. It was really shocking, but I felt really good to finally have achieved it.”

Among those at the ceremony were his mother, his father and his two younger brothers, both of whom also play baseball.

“It was a very special day, and we were very humbled by the outpour of support, not from only his friends and teammates, but former coaches and his coaches and just the administration and community members that came out to support him,” Alison Gibbs said. “He’s worked real hard over the years, and just to see it all come to fruition and see the excitement in his eyes, it just means the world to us.”

“It’s a humbling experience to have anybody from our program move on and get that opportunity to play at the next level, but it was awesome to be able to be a part of the process for him all the way starting at the (junior varsity) JV level, because that class that’s graduating this year, these seniors were the group of kids that I took over as the JV head coach before being the varsity head coach,” he said.

He highlighted Carson Gibbs’ physical and mental maturity and increased self-confidence over the years.

Gibbs is expected to star for the Statesmen this year at first base and in the outfield.

The senior thanked a variety of people for helping him reach his present level of achievement, including Barmoy, Coach Eddie Pyle, his teammates and all of his coaches from his travel ball team, the Evoshield Seminoles, which is out of Richmond Baseball Academy West. Those coaches include Bruce Secrest and Keith Provo.

Gibbs said he is thinking he will major in sports management at Averett, with interest in becoming a scout.