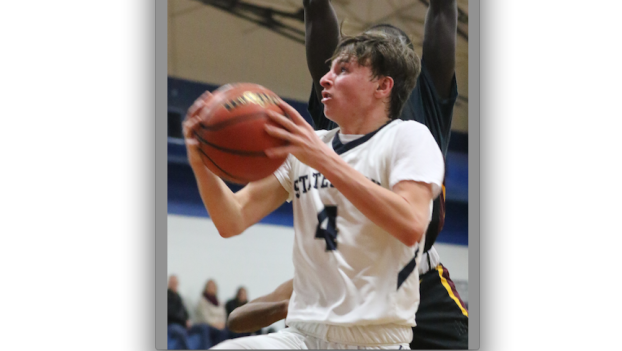 The R-H boys team, which went 9-13 overall, was represented on the 2019-20 All-James River District First Team by junior guard Brenden Francisco, while senior center Reginald Bullock made the second team.

“I felt like we were well represented,” Statesmen Head Coach Joshua Haskins said.

“I think he had some big performances for us throughout the season, but the big factor was he was someone we could always count on day in and day out to come in and put the work in,” he said.

Bullock averaged nearly a double-double and was a solid defender.

“I think the (district) coaches all really enjoyed the way that he played the game and his overall demeanor,” Haskins said.

The coach shared how he will remember the 2019-20 Statesmen.

“I will look back at a group that made huge strides in how we started the season to how we finished,” he said.

The Lady Statesmen finished the season with a 3-18 overall record.

“Looking back over the season, I think that these girls learned a lot and overcame some adversity the first half of the season,” Lady Statesmen Head Coach D.J. Jack said.

He noted his players knew every time they took the floor they were outmanned and knew they had to play a great game to win.

“I can say that they did play hard every game and gave it all they had every game,” Jack said. “They awoke in the second half of the season and played some really great games — just came up short. I think they started listening more to the coaches and figured out if they do what was asked of them they could win some games, and they did.”

The Lady Statesmen had one all-district honoree, as Taylor Trent made the second team.

“I was very pleased with Taylor making the second team all-district,” Jack said. “I felt like she picked up her game the second half of the season and that the coaches in the district rewarded her for that. A couple of the coaches said she was a different player when we played them the second time around.”

Trent averaged 11 points, two rebounds and one assist per game this season.