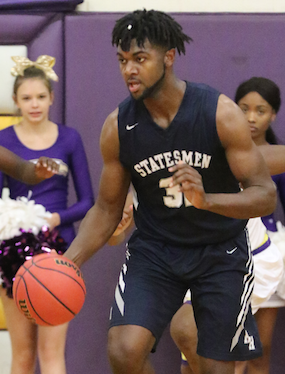 Randolph-Henry High School sophomore forward/center Chris Redd was a leader on offense for the Statesmen in their recent showdown with host Amherst County High School.

Randolph-Henry High School’s (R-H) varsity boys basketball team is fresh off some important learning experiences as it prepares for the Region 2A Tournament.

The Statesmen have earned the No. 8 seed in the region and will host No. 9 Nottoway High School Friday, Feb. 21, at 7 p.m. in the first round of the tourney.

R-H was last in action Friday, Feb. 14, when it took on host No. 1 Buckingham County High School in the James River District Tournament semifinals. The Statesmen fell 77-45 to the Knights, which are regarded as one of the top Class 2 teams in the state.

“It was a tough loss against a very good team that will compete this year in the 2(B) tournament at a high level,” Randolph-Henry Head Coach Joshua Haskins said.

“I think it was a game where we learned we can compete with various people, but you have to keep the main thing the main thing,” Haskins said. “The main thing is doing whatever it takes to win.”

R-H (9-12) is preparing to play the Nottoway Cougars for the third time this season. The Statesmen won the previous two meetings, 54- 42 at home and 50-44 on the road.

“I think the key is knowing that it will not be an easy opponent to overcome, that both games were very competitive, so going in we know we have got to be ready to fight from start to finish and have utmost respect for our opponent,” Haskins said.