Peaking at the right time 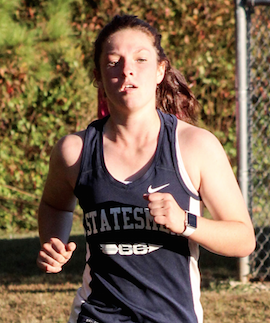 Randolph-Henry High School sophomore Taylor Trent was one of the few participants on the varsity girls cross country team, which did not have the required number of five eligible runners to generate team scores.

“I was very pleased,” R-H Head Coach Josh Guill said. “All the kids improved greatly over the course of the year, … and I guess the goal is to peak around the regional meet as far as having your best performance and stuff. That’s kind of your goal as a coach, because there’s such a thing as doing too much and then doing just enough, and everybody did (the latter), and everybody who ran at the regional meet ran their fastest times of the year, and that’s really what you’re looking for.

“We took fourth out of all the teams, which put us one place out from qualifying as a team for state, for the guys,” he continued. “We had three state qualifiers — one girl and two guys, individually, outside of the team. I think it’s been quite a while since we’ve taken three to states, so that was great.”

Guill explained what they had to do to qualify as individuals.

“At the regional meet, each region sends the top-three teams as a whole to the state meet,” he said. “Now, outside of that, they take the top-five individuals not attached to one of those three qualifying teams.”