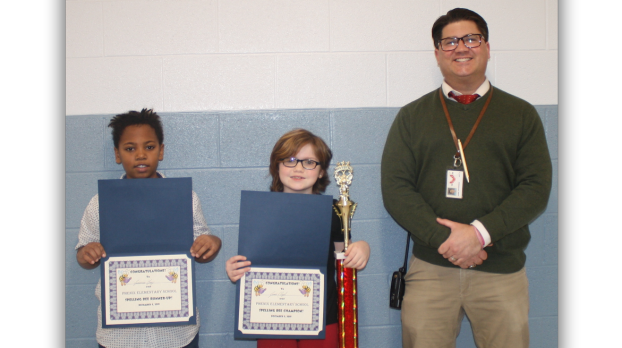 Phenix Elementary School (PES) held its annual spelling bee on Monday, Dec. 9. After the homerooms held their class spelling bees, the winners from each participated in the school’s competition.

Round nine marked the elimination round when Bryant was stumped by the word, “vividly.” The two remaining contestants, Gray and Lloyd, fought hard through 19 rounds until Gray misspelled “channel.” Lloyd correctly spelled “comfort” and “tissue” to be declared the spelling bee champion.

Richardson presented the winner, Lloyd, with the spelling bee winner’s trophy. Gray was presented with the trophy for being the spelling bee runner-up. Each of the contestants received certificates congratulating them and thanking them for their participation and hard work to make the PES Spelling Bee so successful.

Lloyd and Gray advance to the Charlotte County Spelling Bee to be held on Tuesday, Jan. 7, at Central Middle School.