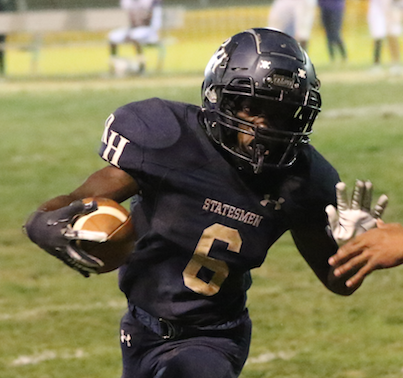 Randolph-Henry High School’s varsity football team gave its home crowd something Friday night that it had long been hoping for — the Statesmen achieved their first win of the 2019 season, defeating visiting Cumberland County High School 26-8.

He noted the Statesmen had some chances to possibly put the game away sooner, but he also made a point to acknowledge what worked well for his squad.

“I thought we really played well in terms of passing the football,” he said. “I thought that we played pretty well up front, pass protecting, and we made some key plays early on in the game. We went up 20-0 very quickly, and we happened to recover an onside kick, which we really weren’t trying to onside it.”

Randolph-Henry junior quarterback Peter Jones went 11-for-22 passing for the game, finishing with 199 yards three touchdowns and one interception.

“I think one thing that we really have is our offensive line really does a nice job of pass protecting,” Orlando said. “It’s very seldom that Peter just gets hit hard, and it’s something that we haven’t done well in the past, and we really worked on it, and these kids have gotten older, and hey, eventually in high school football, somebody is going to be open, and you’ve just got to throw them the ball.”

Walton led the ground attack with nine carries for 52 yards and a touchdown.

“I think, overall, we had some nice drives, offensively,” Orlando said. “We got a bunch of defensive stops. We held twice inside of our own 10-yard line, and eventually, we got in a bad spot at one point, and Cumberland ended up scoring in the fourth quarter.”

Randolph-Henry (1-8) has a bye this week and then will visit Amelia County High School on Friday, Nov. 8, at 7 p.m.

Randolph-Henry High School’s varsity football team gave its home crowd something Friday night that it had long been hoping for... read more