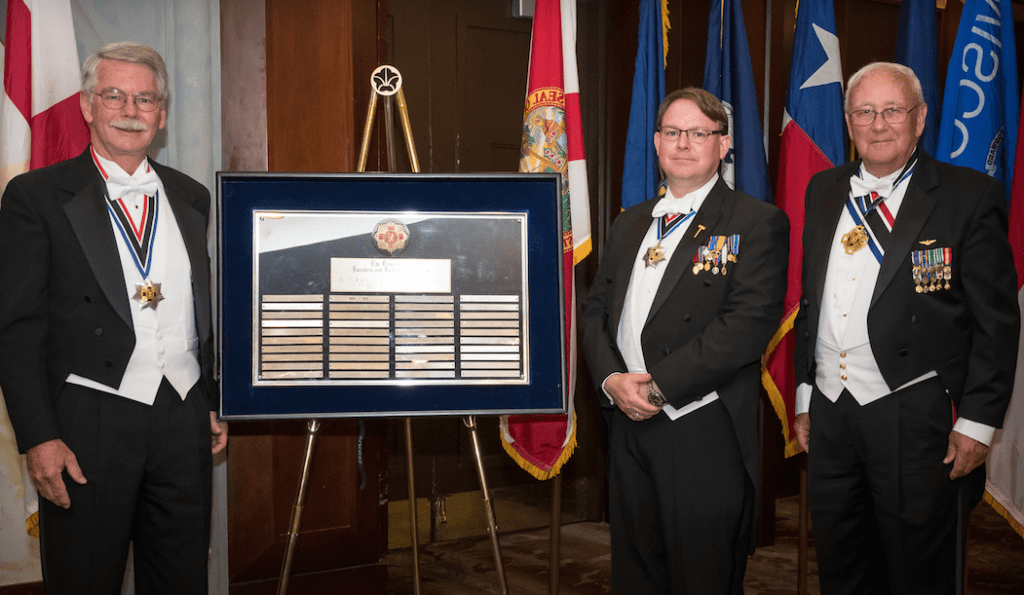 The Order of the Founders & Patriots of America’s National Governor General Richard Wright (far right) and Deputy Secretary-General and Awards Chairman, Thomas Smart (far left) present the H. Carroll Parrish Award to Secretary-General and Virginia Society Governor J. Shane Newcombe for the 11th consecutive time for the Virginia Society having the most patriotic programs, lectures, meetings and commemorations to honor and pay tribute to the fallen heroes of this great nation who sacrificed it all for our freedoms. The H. Carroll Parrish Award is the Order’s highest accolade.

The General Order of the Founders and Patriots of America (OFPA) gathered in Richmond at the Omni Richmond Hotel & Conference Center May 23-26 for the historic 123nd General Court of the Order. These General Court gatherings of State Society and National Officers have been meeting since the Order was formed in 1896 and the Order will soon celebrate its quasquicentennial (125 anniversary) in New Orleans, Louisiana. While in the Commonwealth, tours were given of the Virginia State Capitol, the Executive Governor’s Mansion, Shirley Plantation, Virginia Museum of Fine Arts, Maymont Mansion & Park, Historic Jamestowne and the American Revolution Museum at Yorktown. Renowned Virginia archaeologist and author, Nick Luccketti was the guest speaker at the formal dinner held at the Commonwealth Club and the following night all associates of the order along with their dates and guests assembled for the Massing of the Flags led by a Scottish bagpiper; enjoyed a wonderful dinner in the Magnolia Room at the Omni and ended the Annual Banquet with the annual Awards Presentations. In total more than 50 associates gathered from across the nation to honor the 123rd General Court and hailed Richmond and the Commonwealth with its Quadricentennial Celebration of the American Evolution from 1619- 2019.

The Order of the Founders and Patriots of America is a hereditary organization. Founded in 1896, the OFPA is comprised of “associates,” who trace their ancestry back to those first colonists and who have forefathers in the same male ancestral line who served in the American Revolution. Membership is open by invitation to any man of the age of 18 years, of good moral character and reputation, and a citizen of the United States, who is lineally descended, in the male line of either parent, from an ancestor who settled in any of the original 13 colonies now included in the United States of America prior to May 13, 1657; and one or all of whose intermediate ancestors in the same line, who lived in the period of the American Revolution from 1775 to 1783, adhered as patriots to the cause of the colonies, shall be eligible for membership in the Order.

The OFPA is broken down into constituent or state societies. The Virginia Society OFPA meets more than twice a year at varying locations throughout the Commonwealth to honor, pay tribute, and commemorate the early founders and patriots of our nation. Wreath laying ceremonies and services along with guest presentations, lectures, and programs are held. The Virginia Society OFPA was the host society for this national 123rd General Court.

Shane Newcombe a native of Randolph, and Director of Accessories Abroad a wholesale furniture and home accessories company based in Virginia, and High Point, North Carolina represented his home state, the Commonwealth, and the Virginia Society OFPA to the 123rd General Court. Newcombe is the current Governor of the Virginia Society as well as serves as the National Order’s secretary-general, the third highest-ranking elected officer for the nationwide society. Newcombe’s mother, Virginia “Jenny Lou” Newcombe accompanied her son on the trip and she was recognized as being a direct lineal descendant of James Allen, a Founding Ancestor who arrived in Jamestowne in 1608 and Captain Richard Allen of the Cumberland Militia during the Revolutionary War. Also, Angel E. Robertson, Newcombes girlfriend, represented her family and their Germanic heritage from Europe and has been very supportive of Newcombe’s endeavors. During the 123rd General Court’s Annual Awards Banquet Secretary-General Newcombe was bestowed with the Parrish Award, the Order’s most prestigious award, which is presented to constituent societies for being the most active, having the highest number of new associate recruits, retaining its roster of associates, holding numerous programs and presentations throughout the calendar year, and commemorating the cause of liberty through memorializing our nation’s founders and patriots by means of wreath laying ceremonies, religious services, and educational programs. This marks the 11th consecutive year in which the Virginia Society of the Order of the Founders and Patriots of America has been awarded the Parrish Award. More information about the Order can be found at www.founderspatriots. org.