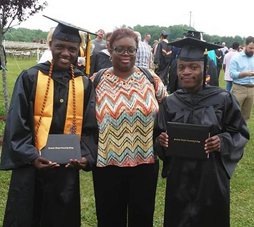 The Craigheads are pictured, from left, Ryan, Sevina, mother; and twin brother Bryan.

Twins Bryan and Ryan Craighead have more than just their birthday in common. As of May 11, they are Southside Virginia Community College (SVCC) graduates.

From Saxe, both graduated from Randolph-Henry High School.

Bryan chose to study Information Technology, and Ryan chose to study what he has always dreamed of, Administration of Justice. While taking classes, Bryan was employed by SVCC’s Buildings and Grounds department, and Ryan was a part of SVCC’s Safety Patrol and was a Student Ambassador.

Both say that the most meaningful part of their academic journey were the teachers they met through SVCC and how much they truly cared about their students’ success. Bryan would like to thank Joan Tuck for all her support, and Ryan would like to thank Doug Whaley, Judith Vaughan, Wanda Vaughan, and, two important people from the brothers’ church, Loretta Bailey and the Rev. Marvin Bowman.

After three years of hard work for Bryan, and two years for Ryan, the brothers earned their associate degrees. Both are currently pursuing jobs in their relative fields of study, and Ryan plans to continue his education online with Liberty University while working.

When asked if they had advice for current and future SVCC students, their responses were, “never give up on yourself” and “be prepared for the unexpected.”