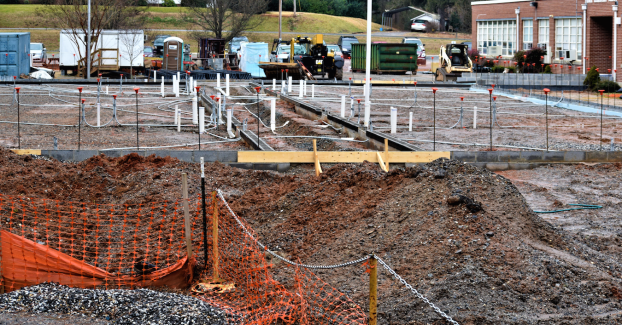 Work on Phenix Elementary school is well underway - Conduit for electrical cable, water lines and other utilities are laid out in preparation for concrete slab to be poured.

Members of the Charlotte County Board of Supervisors and School Board convened together recently for a joint work session.
The sole topic on the agenda for the public meeting was the school renovation projects currently underway at Bacon and Phenix district elementary schools.
Phase one of the renovation project is currently underway at both schools. According to Charlotte County School Superintendent Dr. Nancy Leonard, “Right now new gymnasiums are being built at both schools. In addition, work is being done to complete eight new, handicapped accessible classrooms at Phenix, so we can do away with the temporary classrooms. There has been work done to the entryway at Phenix as well to accommodate the new classrooms.” She went on to add, “While all of this has been going on at Bacon and Phenix, we have also installed new HVAC at Eureka School as well.”
The HVAC work at Eureka cost $3.1 million, according to Dr. Leonard.
A May 2018 PPEA bid was submitted by Jamerson-Lewis Construction for $3.2 million – not to exceed $6 million – for Phase One work being done currently.
The collaborative effort of the two county agencies was to thoroughly examine and address specific issues relevant to progress made during the first phase of upgrade projects to the aging Bacon and Phenix district elementary school buildings.
Public turnout to the evening meeting was high. County residents, many of whom attended to voice concern or seek clarification to terms of the work contract all but filled the gallery of the Board of Supervisors meeting hall.
A point of major concern discussed during the meeting was the overall general nature of the project’s list of dollar amount estimates for proposed work to be done on the two schools
“Right here there is an estimate for $200,000 for electrical work,” one resident pointed out. According to this estimate, nobody knows what work that money will pay for specifically.”
Concern over the vague nature of the current work overview and estimate was a point echoed by several residents during the meeting. A request for a more specific, line/item type proposal was the consensus view as the project moved into phase two.
The Board explained that because the school renovation project was utilizing a PPEA contract award system, phase two of the project was open for bid, therefore specific cost estimates would not be available until the contract had been awarded.
Another concern voiced at the meeting was conjecture over whether Bacon School would be closed.
“I want to make it very clear that there is no intention whatsoever to close Bacon district school,” Dr. Leonard said. “That is simply a piece of misinformation I would like to put to rest.”
According to public record, the proposed estimate to complete Phase Two work on Bacon and Phenix schools is approximately $6.5 million. This number is above the original $3.2 million for Phase One work, and it does not include the $3.1 million spent on HVAC work at Eureka School.

‘Intermodal Transportation’ isn’t a phrase that is used frequently in this area. There simply isn’t a need for it. Specifically,... read more