With reports of more than a foot of snow in Charlotte County, it’s safe to say winter storm Diego left quite a mark. 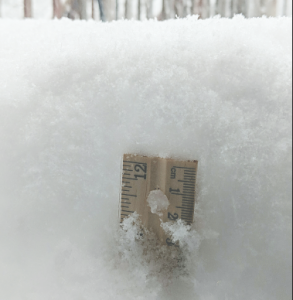 It began snowing early Sunday morning. Though some periods of snowfall were heavier than others, snow continued to fall into Sunday evening, stopping by Monday morning.

Fillo said the snowfall amounts seemed relatively uniform throughout the county. He said there were three snowfall reports given to the NWS in Wylliesburg, Drake’s Branch and Keysville.

Toward the southern end of the county, Fillo said, “there was probably some sleet and some freezing rain mixed in with that, in addition to the snow.”

Concerning the storm, Fillo said storms this early in the winter aren’t impossible, but aren’t common, either. 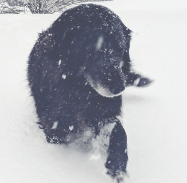 “Certainly not unheard of, but it’s not usual to have storms of this magnitude this early in the winter,” Fill said. “These would be storms you would see more commonly in the later half of January into March.”

Power outages took place in the area beginning Sunday with the majority seeing restorations by the end of the day Monday or Tuesday.

“Diego brought heavy snow across all of SEC’s territory, impacting trees and power lines with falling and leaning trees breaking equipment and infrastructure,” officials from SEC cited in a news release. “Because of this damage, members are encouraged to plan for possible extended outages.” 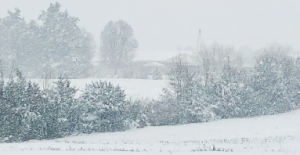 Pictured is the wintry world in Darlington Heights, near Charlotte County. Photo by Stacy Kinder.

At 6 a.m. Sunday, Dominion Energy in Virginia officials said more than 100,000 customers experienced a power interruption as a result of the storm. They said approximately 33,000 customers were without service as of Monday morning.

“While damage assessment is just beginning, many outages have been the result of tree contact resulting in blown fuses, wire down and some broken crossarms,” Dominion officials cited.

“Travel in the impacted areas will be hampered by deep snow and hazardous travel conditions. Initial damage assessment and patrols will be key this morning to verify damage and develop estimated times of restoration for all impacted customers.”