Jenkins re-elected to board

At 45 years and showing no signs of stopping, Jerry M. “J.M.” Jenkins has been the longest serving member of the Virginia Farm Bureau Federation (VFBF) board of directors.

Jenkins was re-elected to the board Thursday to serve his 16th, three-year term. 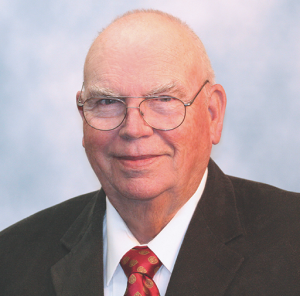 He, with more than a dozen other directors of the board, meet monthly to discuss and take action regarding agricultural issues affecting Virginia. Jenkins represents Charlotte, Lunenburg, Brunswick and Mecklenburg counties, chairing the Flue-Cured Tobacco Advisory Committee and is a member of the Soybean & Feed Grain & Grain Marketing Advisory Committee. There’s also a committee that lobbies the General Assembly to advocate for issues that affect farmers and other issues relating to agriculture.

He also is a past president of Lunenburg County Farm Bureau, according to officials with the VFBF.

Greg Hicks with the Virginia Farm Bureau Federation confirmed that Jenkins has been the longest serving member of the board of directors.

Concerning his appointment on the board, Jenkins, 81, said, “I’ve been fortunate enough to be re-elected.”

He added, as a joke, “I was first elected to it fairly young, and I guess I’ve outlived my competition.”

He said being on the board allows him to be active in the trends that affect farmers and enact change.

“Being a farmer, I’ve always been interested in things related to farming, and then this way you get to see the overall view of agriculture in the state of Virginia, and be a participant in trying to determine the outcomes of certain issues that come up,” Jenkins said.

Jenkins has been a farmer for most of his life. He has also lived in Lunenburg most of his life, except for five years in which he worked as a cooperative extension agent in Gloucester County and supervised a tobacco production company in Venezuela.

Jenkins has worked on and owns farmland both in Lunenburg and in Brunswick County.

His specialization has been in tobacco, though Jenkins said the price in tobacco production became too high to grow competitively. He said he primarily grows soybeans, and grows some corn.

Jenkins said the issues that he and other board members most discuss include land use, the constant competition between zoning for development and zoning for agricultural use; advocating for laws that allow the right to farm with the General Assembly; water regulations set by the Environmental Protection Agency (EPA).

Jenkins spoke about out-of-country trades that may be affecting the price of commodity in Virginia, particularly with soybeans.

“We’re actively involved in that, trying to influence people to … favor farmers,” Jenkins said. He said his goal is to primarily endorse Virginia-based farmers, but said the bureau looks to benefit farmers throughout the U.S.