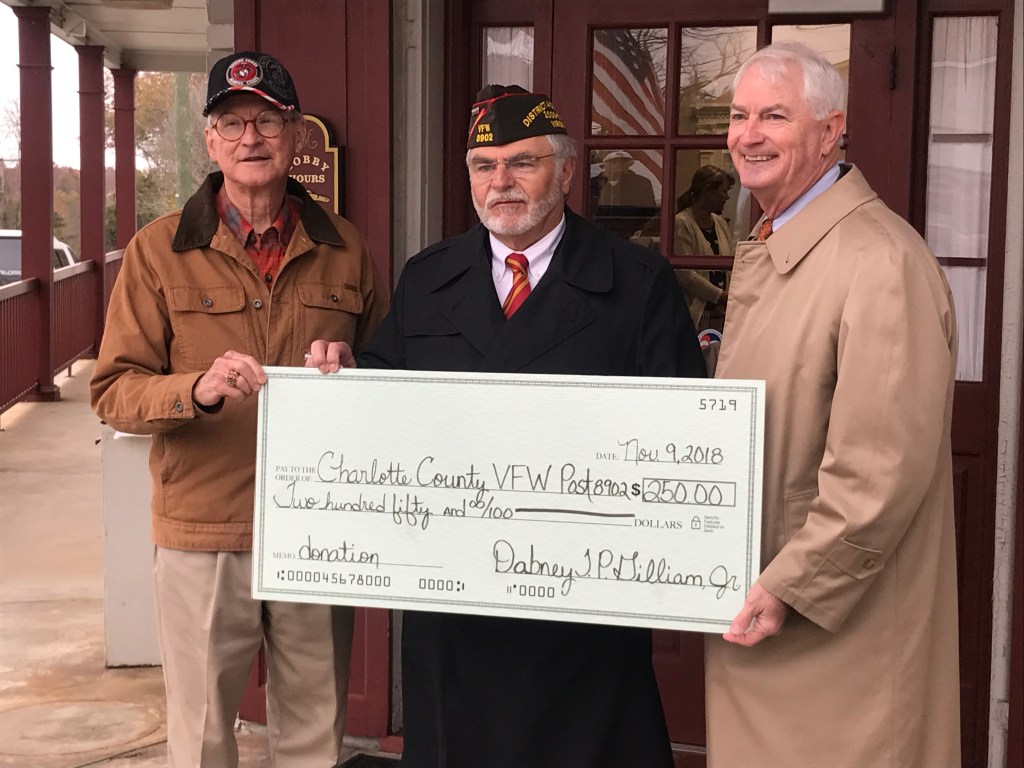 Charlotte County VFW Post 8902 was presented a donation from the Bank of Charlotte County in Phenix during their Veterans Day program. Pictured are, from left, Bobby A. Howard, Garland H. Hamlett, Jr. and Dabney T.P. “Dexter” Gilliam Jr.

The Bank of Charlotte County held a special Veterans Day program during their customer appreciation event at the main office branch in Phenix Friday to honor those who served in the armed forces. 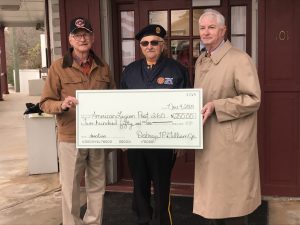 American Legion Post 260 was presented a donation from the Bank of Charlotte County in Phenix during their
Veterans Day program. Pictured are, from left, Bobby A. Howard, Dennis Fritz and Dabney T.P. “Dexter”
Gilliam Jr.

He said each fall, the Bank has had a customer appreciation day.

“This year marks the 100th anniversary of Armistice Day, or what we now know today as Veterans Day,” said Gilliam.

He said the Bank thought it would be appropriate to hold the Customer and Community Appreciation Day as a part of Veterans Day this year.

Gilliam said the bank is entering its 106th year of operations.

The Randolph-Henry High School Marching Statesmen provided a rendition of the national anthem for the occasion.

Gilliam said it never hurts to remind of the history surrounding Veterans Day.

He said “On the 11th hour of the 11th day, of the 11th month of 1918 an armistice or a temporary cessation of hostilities was declared between the allied nation in Germany in the first World War.”

According to Gilliam, in 1919, Nov. 11 the day become known as Armistice Day.

“… We have Memorial Day in May … and sometimes it’s a little bit of confusion between the two,” said Gilliam. “But as we all know, Memorial Day honors those American service members who died in the service of their country or as a result of injuries incurred during battle. Veterans Day pays tribute to all American veterans, living or dead, who served their country honorably …” said Gilliam.

After the brief ceremony Gilliam and former Bank President and CEO Bobby Howard presented both the American Legion Post 260 and Charlotte County VFW Post 8902 with a $250 donation each.

Community Appreciation Day continued as an all day event at branches in Phenix, Charlotte Court House, Keysville and Brookneal with refreshments.