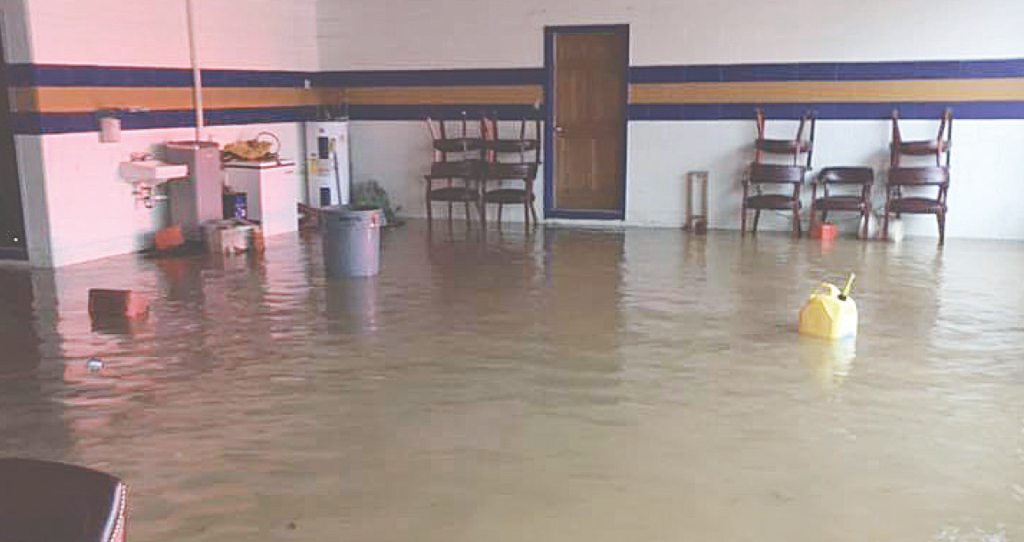 The Town of Drakes Branch held a community meeting Oct. 17 at the Drakes Branch Municipal Building to discuss results from a recently conducted flood study and offer solutions to correct flooding in the town.

During the meeting, the town’s consultant, A. Morton Thomas and Associates made a short presentation concerning the goals of the study and findings before opening the floor to comments from citizens. 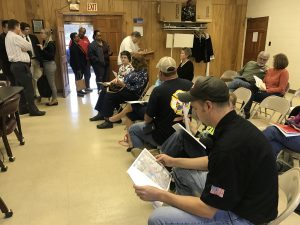 Member and friends of the Drakes Branch community gathered Oct. 17 during a community
meeting to discuss the results of a recent flood study conducted by A. Morton Thomas and
Associates.

According to information from the Commonwealth Regional Council (CRC), “the goal of this study is to evaluate drainage and flooding problems along the tributary to Twitty’s Creek, which runs behind and under the buildings on Drakes Main Street, evaluate and revise the identified flood zone in that area and develop a list of planned improvements by the Town.

The meeting followed recent flooding in the town, occurring after floodwaters struck during Hurricane Michael.

“This study actually came about when we were … planning for a possible downtown revitalization project here in Drakes Branch through Department of Housing and Community Development,” said CRC’s Deputy Director Todd Fortune. “During the planning process it came to our attention that there was flood problems in this area …”

He said an allocation of planning money was granted by the Department of Conservation and Recreation (DCR) to conduct the downtown flood study.

“There’s no surprise to most of the people in the room that there is a history of flooding in Drakes Branch,” said Associate Don Rissmeyer, A. Morton Thomas and Associates.

He said their goal with the engineering study was to first look at the flood history in the town.

Rissmeyer said hydrology was also done to estimate the peak discharges coming off the watershed.

“We’re primarily asking you guys to make sure we that do understand the flooding that occurs … that we have the right answer …” said Rissmeyer.

The results included “a basis for accurately mapping the special flood hazard area on the FEMA (Federal Emergency Management Agency) flood insurance rate maps.” In addition, public safety concerns were a big topic of discussion in relation to the existing fire station and municipal office buildings in the town on main street.

Other buildings at risk were also discussed.

Rissmeyer said smaller storm events include less than 1 inch of rain, including standing water behind the fire station and heavy runoff through a gravel parking lot on the east side of main street.

He said these are frequent storm events.

“This is not really flooding, this is less than an inch of rain, this is what normally happens in the downtown area …” Rissmeyer said.

During Hurricane Michael, he said the lowest point of water across Main Street in Drakes Branch was probably about 3 feet deep.

“We weren’t sure we could even have the meeting …” said Rissmeyer. He said the municipal building and fire department flooded during Hurricane Michael.

“At this point, the fire department has had to move two vehicles out at the advice of an engineer that the building might collapse,” said Rissmeyer.

He said in other sections of the fire department, the floor is settling “and when there’s a serious flood event, you can see the water seeping up through the floor …”

Rissmeyer said when the firefighters come in to respond to a call, they have to cut the power off so no one will get electrocuted.

Rissmeyer said an interesting fact about Drakes Branch is that the water goes underneath the buildings.

“Normally, we like to see drainage systems under the roads …,” he said.

Rissmeyer said it is a situation that at least four or five buildings have the main channel of water flowing underneath.

Another issue identified was undersized culverts in Drakes Branch that contribute to backwater and roadway overtopping in the event of a larger storm.

Additionally, a high railroad embankment, located near Twitty’s Creek, backs up into Main Street during larger storms and “two inlets on Main Street are located where their discharge pipes go under existing buildings to then discharge into Drakes Branch,” said information provided by A. Morton and Associates.

“There’s a massive lake with a large dam …” said Rissmeyer.

Information provided by A. Thomas Morton and Associates said Roanoke Creek Dam #72A has a flood inundation zone for a sunny day dam breach that is 6 feet deep over the road in town.

“If that dam was to break, we would be under about 8 feet of water running at velocities that would knock the building over,” said Rissmeyer.

He said as long as the dam is well maintained, there is no issue.

“Obviously, the building would be built outside the floodplain …” said Rissmeyer referring to a new fire station/municipal building.

He said the floor would also be at least 1 foot above the base flood elevation. “So the fire house is safe and protected …”

Rissmeyer said when Main Street in Drakes Branch floods, it is under 3 feet of water.

“The exact location of the building isn’t totally figured out … as you go up Main Street, it climbs pretty quick … so when you’re talking about a flood in Twitty’s Creek it’s just a matter of being far enough out of Twitty’s Creek so that this building is not at risk …” said Rissmeyer.

Drakes Branch resident Garland Hamlett, Jr. asked If there had been any consideration for doing engineering work on Twitty’s Creek.

“… it’s a lot of debris there, so it’s stopping the flow of the water …” said Hamlett.

Town water/wastewater plant employee James Napier said VDOT (Virginia Department of Transportation) worked on it previously, however, it has built back up.

Rissmeyer said the next step is to find solutions. He said when water is more than 6 inches deep it is dangerous.

Drakes Branch resident Phil Jackson said the study was not taken far enough up through the downtown area.

“There are risks of flooding outside of the floodplain …” said Rissmeyer. However, he said the engineers were looking to accurately map the risks in the downtown area.