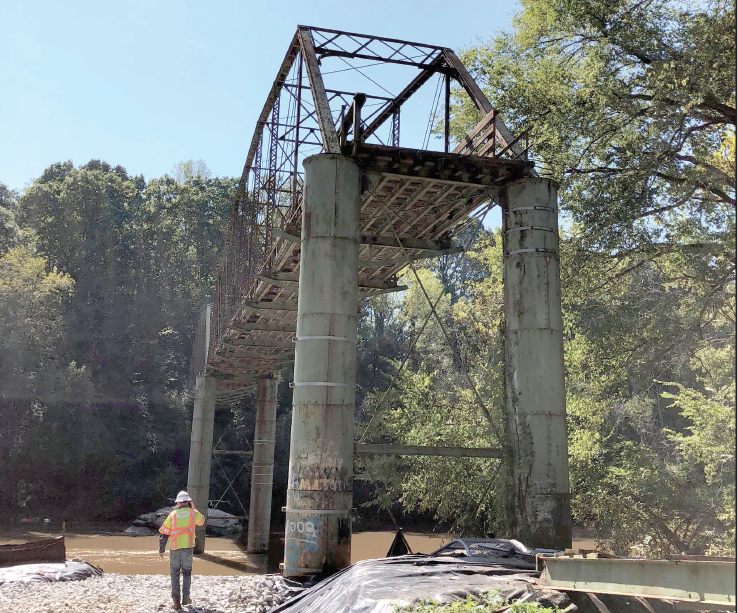 The historic Clarkton Bridge, which connects Charlotte and Halifax counties across the Staunton River is currently in the process of being removed. (Photo by Bill Wise)

The historic Clarkton Bridge, which connects Charlotte and Halifax counties across the Staunton River is currently in the process of being removed.

“The expectation is that the bridge will be removed by the end of the year, weather permitting,” said Virginia Department of Transportation (VDOT) Lynchburg District Communications Manager Paula Jones.

The Clarkton Bridge has been closed to all traffic since 2015.

Jones previously said “a $505,763.00 contract was awarded for the dismantling and removal of the Clarkton Bridge.”

At an August meeting of the Charlotte County Board of Supervisors, Aspen/Phenix Supervisor Donna Fore said the Department of Game and Inland Fisheries (DGIF) has been trying to be respectful so individuals could still enjoy access to the river while the weather is good for fishing and outdoor recreation, noting why the demolition was held off starting until September.

At that time, she said the demolition must be complete by January 2019.

“There is respect for the fact that it is of historical significance to that bridge,” she said. “The contractor will preserve memorabilia from the bridge to be used in a public setting …”

She said this could include a public library or a museum. “They’re going to remove some pieces of the bridge for historical purposes to retain it,” said Fore.

She said in the future, it is desired for a meeting to be held with the DGIF and VDOT after the demolition of the bridge.

Fore said the purpose of the meeting would be to discuss options for the boat access currently located on Clarkton Bridge Road into the Staunton River.

“That’ll have to happen in January or February once the bridge is down we can see what we have left there to work with,” she said.

Fore said all options are being kept open.

“We want to respect the fact that people need access to the river … the area that’s available to us is a 30 foot easement from the road, that’s not a very wide area, but it is wide enough to do a boat launch,” said Fore.

She said the only concern raised at that time was a turnaround area for vehicles.