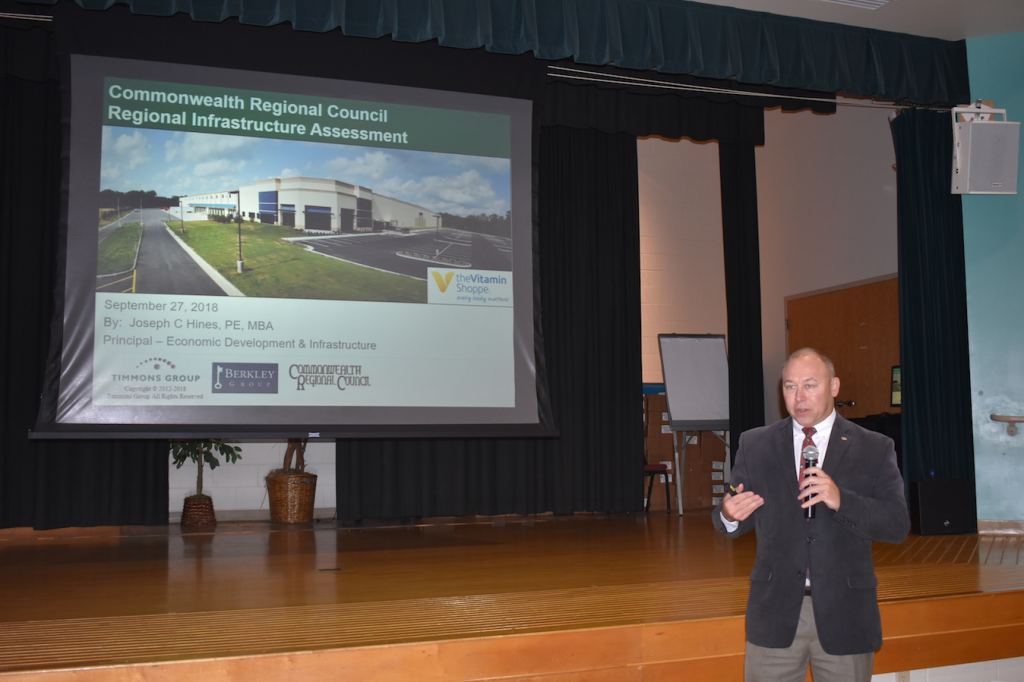 Joe Hines with the Timmons Group speaks about the industrial potential of the region during a meeting with business leaders and stakeholders in the region Thursday.

Members of the Commonwealth Regional Council (CRC) and business stakeholders and economic developers in the region gathered to discuss the importances of a Comprehensive Economic Development Strategy (CEDS) in the area during a meeting held at the Workforce Development Center at Southside Virginia Community College’s Keysville Campus Thursday.

Todd Gordon, a representative of the Berkley Group, a consultation company, spoke about the importance of a region having a CEDS program.

During the meeting, stakeholders and business leaders collaborated to identify strengths, weaknesses and ways to facilitate economic development in the region.

Joe Hines, principal of the Timmons Group, an engineering and technology firm based in Richmond, spoke about the industrial trends currently taking place in the region and ways that the Heart of Virginia could take advantage of potential economic development opportunities.

“CEDS is a locally-based, regionally-driven economic development planning process and document,” documentation from the CRC cited. “The purpose of a CEDS is to bring together public and private sectors in building a roadmap with a strategy-driven focus to diversify and strengthen the region’s economy.”

The CRC received a grant in fall of 2017 to develop a regional CEDS program. The CEDS program would allow the CRC to receive more grant funding from federal organizations. The regional CEDS committee is made up of members of local government, business owners, chamber of commerce members, and representatives of higher education institutes.

CEDS covers the region of Prince Edward, Amelia, Buckingham, Lunenburg and Charlotte counties. Its kickoff meeting was in April.

Gordon said one of the main goals of the CEDS committee is to help the region collaborate on a series of goals that could bolster the region’s economic growth and create safeguards in the event of economic turmoil, or even a natural disaster.

“Planning for the future is important,” Gordon said. “You have many, many organizations, including the board of supervisors and others making a lot of small decisions along the way. It’s important that they have a long-range goal of where they want to be, to help guide those decisions.”

Gordon said the Berkley Group is set to collect information from the CEDS committee, and plan on making a draft plan for economic growth with the CEDS in January, which would be reviewed by the committee and by the public. After review, the plan would be adopted.

Hines said Virginia recently has been able to attract global industries to the area, citing the data center company, Telefonica, which will contain trans-Atlantic data cables stretching from Virginia Beach to the Netherlands.

Hines cited the potential fiber access and connectivity provided by the Mid Atlantic Broadband Company and the potential energy opportunities from the Atlantic Coast Pipeline installation beginning in Buckingham County.

Hines suggested places to begin to attract economic development could potentially market to IT and data centers, which would yield a low traffic demand, a medium to high water demand, a low to medium wastewater demand and a high power demand.

Other possibilities could include logistics and distribution centers, such as Amazon; food and beverage industries; advanced manufacturing and wood products.

Using the criteria provided by Site Selectors Magazine for top qualifiers for a potential business location, Hines said the region’s strengths lie in transportation infrastructure, utility infrastructure, land/building prices and supply, ease of permitting and regulatory procedures, Virginia being a right-to-work state and having access to higher education resources.

Concerning municipal water and sewer systems in the region, Keysville sees an estimated 500,000 gallons per day of wastewater processed.